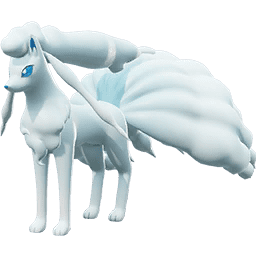 Causes snow to fall on an enemy, dealing damage to it and decreasing their movement speed for a short time. Boosted attacks and moves (except Aurora Veil) sling snow, and hitting the same target with snow multiple times will freeze it for a short time.

Becomes a boosted attack with every third attack. When this boosted attack hits, it deals damage to nearby enemies and decreases their movement speed for a short time.

Attack with a chilly gust of powdery snow, decreasing the movement speed of enemies for a short time when it hits. Powder Snow slows and deals damage on a cone area when cast. It is great for dealing area damage and for slowing down enemies who are trying to escape or are trying to chase you or your team.

Attack with a gush of chilly ice toward the designated area. The ice forms a wall that cannot be passed through on land. After a short time this wall melts and collapses, dealing damage to enemies in the area of effect.

Also decreases the movement speed of enemies for a short time when this move hits. Avalanche deals area damage and creates an impassable wall. After a short time, the wall melts and deal damage to enemies around it.

Avalanche is great for keeping enemies from escaping or from chasing your team.

It also synergizes perfectly with the Blizzard move because when Blizzard hits a terrain, it deals bonus damage. The wall of Avalanche makes sure that there is always a terrain for the bonus damage of Blizzard.

Attack with a powerful cone of blinding light, leaving enemies unable to act when this move hits. Dazzling Gleam is an area hindrance that is also a sure hit. Once cast, all enemies in the area of this move are stunned.

Take note of the snowflake icon above enemies so if possible, you will be able to chain hindrances on your enemies.

Attack with a gust of freezing air, dealing damage to enemies in the area of effect and decreases their movement speed for a short time when it hits. Icy Wind deals more damage and has a longer range compared to Powder Snow but it has a narrow area of effect and can be harder to hit because of its narrow area.

The longer range of Icy Wind makes it ideal for stealing wild pokemon from enemies. Blizzard is ideally used in conjunction with Avalanche. The wall Avalanche creates makes sure that Blizzard deals more damage.

If one of the two moves is on cooldown, wait for it to be both available to make full use of their effects.

Create an aurora around the user, reducing damage received by the user and nearby allies in the area of effect. While the user is inside the aurora, its movement speed is increased and its basic attacks become boosted attacks. Aurora Veil is a strong offensive and defensive buff.

Defensively, it decreases the damage you and your allies receive while inside the aurora.

Offensively, Ninetale’s movement speed is increased and her attacks all become boosted. It gains area of effect, slows enemies, and each hit stacks to the snowflake icon that stuns enemies when full.

Snow Globe is an area Unite move that deals burst damage all around Ninetales. It is great for bursting down enemies you are trying to knock out and it deals more damage against frozen enemies.

If you want to deal more damage to enemies, make sure to use your other abilities first to freeze enemies before using your unite move.

Here are our Recommended builds on Alolan Ninetales

Buddy Barrier activates when the Unite move is used. It grants a shield to Ninetales and the lowest HP allied pokemon near the user.

Exp Share grants bonus XP per second to the user when they have the least experience and it grants bonus experience to your lane partner if they land the last hit on wild pokemon.

Eject Button is your emergency button when enemies get too close for comfort while your abilities are on cooldown.

The Avalanche Blizzard build is a fully offensive build that focuses on the burst damage synergy of Avalanche and Blizzard.

Wise Glasses increase special attack. This held item grants the most special attack bonus which is important for this build that focuses on burst damage.

Choice Specs makes your next move every 8 seconds will deal so much more damage to a single enemy Pokemon because of this item. The Avalanche Blizzard move relies on Alolan Ninetails dealing burst damage to quickly finish off an enemy and this Held item will help with that.

Energy Amplifier increases the charge rate of its user’s Unite move. Alolan Ninetails’ damage cannot always finish off enemies with just one combo without its Snow Globe Unite move so this item will help Alolan Ninetails execute its full damage combo more often. Plus, it increases the damage output of its users after using the Unite move so you will be a lot stronger and capable of cleaning up those who survive your full combo.

This build also uses the Eject Button for the increased safety of your pokemon.

Alolan Ninetales is a burst damage attacker that can apply a lot of hindrance through its passive, Snow Warning that constantly slow down enemies through boosted attacks and moves and marks them. Once full marks are applied to enemies, they become frozen.

Alolan Ninetales is one of the stronger Pokemon in the early game. It is capable of harassing enemies endlessly thanks to its two ranged moves that can slow and shove enemies. Because its moves are ranged, you can easily attempt steals with Alolan Ninetales.

What is the role of Alolan Ninetales when taking objectives?

Alolan Ninetales is an attacker but its damage output is on the average side because of its dependence on its moves for damaging enemies.

Because of this, the best thing to do while your allies are taking on Drednaw, Rotom, or Zapdos, is to wait under the grass then burst down an enemy that comes near you. One full combo of Alolan Ninetales is enough to shave off over half the health of an enemy Pokemon. If they stay, they’ll die, if they leave, they decrease their chances of winning the objective fight.

If you are stuck with another attacker or maybe an all-rounder, you can assume the support role by using this build. When Alolan Ninetales use this build, it can bring a lot to the team while being under-leveled. Its Dazzling Gleam is an instant stun and Aurora Veil is an area buff that decreases the damage taken by Alolan Ninetales and all allies in the area it is cast while increasing Alolan Ninetale’s own movement speed and buffing all of its basic attacks, turning it into boosted attacks.

The Avalanche Blizzard build is the carry build for Alolan Ninetales. It can easily burst down even the strongest enemies if you use its full combo together with Alolan Ninetales’s Unite move.

Stay behind your defenders and supports and be ready to unload your combo whenever an enemy pokemon reaches your effective range.

When is the best time to use the Snow Globe Unite move?

Snow Globe is basically an area burst damage move. The trick here is simple, you have to use it when your target enemy is frozen. It deals a lot more damage on frozen targets.

The Avalanche > Blizzard > Snow Globe effect can knock out almost all pokemon from 100% – 0 and it is a potent combo to secure objectives, Drednaw, Rotom, or Zapdos as well.

Alolan Ninetales lives in the snow-capped Mount Lanakila. It is revered as a holy ground and so the Alolan Ninetales is respected as a sacred messenger or diety. It is known to aid those who are lost, but it is primarily because it wants people away from its territory.