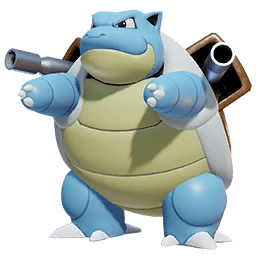 Best Blastoise build guide for Season 1 in Pokemon Unite. With our Blastoise guide, you will learn the best Held and Battle items to build, moveset, and how to use the moves of Blastoise properly. Learn tips and tricks on how to play Blastoise and counter your enemies.

When the Pokémon is at half HP or less, its Attack and Sp. Attack are increased.

Attacks with a shot of water, shoving Enemy and decreasing their movement speed for a short time. 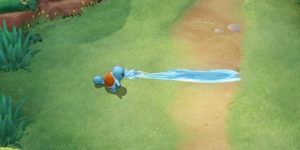 Water Gun is great for knocking out wild pokemon, harassing enemies, and for pushing either wild pokemon away from enemies or you can also push enemies away from wild pokemon.

Offensively, it is best to use Water Gun in combination with Skull Bash. Squirtle will go through enemies after using Skull Bash, positioning them behind enemies. This makes its position best for using Water Gun to push enemies away from their goal zones and towards your allies.

Has the user attack by blasting out a huge volume of water, dealing damage to Enemy pokemon and slowing them when it hits. 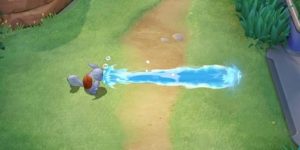 Hydro Pump is the upgraded version of Water Gun. It deals more damage, has a longer range, and knocks enemies back farther.

Just like with Water Gun, use Hydro Pump to harass enemies from a distance and deny them good positioning. You can push them away from their goal zones or away from Drednaw, Rotom, or Zapdos.

You can combine it with Surf to push enemies away much farther away. Combine further with Eject Button to manipulate the direction you want to push enemies.

When combined with Rapid Spin, Hydro Pump becomes a radial area move that pushes enemies away from Blastoise.

If you want to cast Hydro Pump while using Rapid Spin, position yourself first in the middle of the enemy team so you can push some enemies towards your team while pushing away the others, dividing them and making it easier for your team to conquer them. Remember to cast Hydro Pump first as Rapid Spin resets the cooldown of Blastoise’s other move.

Spouts water toward the designated location, decreasing the movement speed of enemy pokemon in the area of effect for a short time. 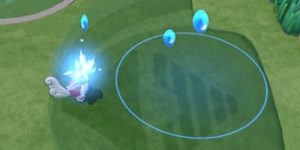 Water Spout is an area move that rains down an area, slowing and damaging enemies for a duration.

Water Spout is quite underwhelming on its own but when combined with Rapid Spin, it becomes a viable damage per second move.

Cast Water Spout first as its cooldown will reset once Rapid Spin is cast. Plus, the damage from both casts of Water Spout will stack.

Fiercely rams an enemy pokemon and leaves it unable to act. 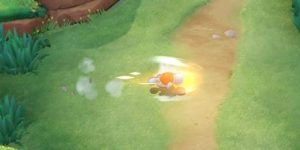 Skull Bash is a dash move that deals damage and stuns enemies.

The great thing about Skull Bash is that it makes Squirtle pass through enemies. This makes it possible to push enemies towards their side of the map using Water Gun or Hydro Pump.

has the user charge forward on a wave, shoving enemy pokemon and leaving them unable to act. the user becomes immune to hindrances while using this move and can jump in a designated direction once this moves ends.

Upgrade: Also grants a shield when this move hits. 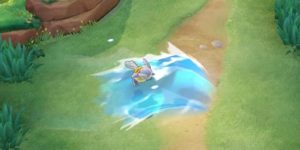 Surf is the upgraded version of Skull Bash. It summons a large wave that damages, stuns, and drags enemies hit.

After Surf ends, Blastoise will jump towards the direction that its trainer chooses through the left analog stick.

Surf can be used to push enemies away from your team or from goal zones or Drednaw, Rotom, or Zapdos.

Surf can also be used offensively by sneaking towards the back of enemies and dragging them towards your team. In clutch situations, this can be done in combination with Eject Button.

You can also Surf towards enemies and use Hydro Pump to push them towards your team but this combination only works against less mobile pokemon.

Has the user spin rapidly, changing the mechanics of its basic attacks as well as its hydro pump and water spout. white this move is in effect, the pokemon becomes immune to hindrances. In addition, the user’s next basic attack after this move ends becomes a boosted attack. 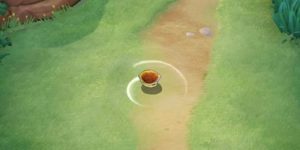 Rapid Spin allows Blastoise to move around the battlefield while damaging and slowing enemies.

Rapid Spin resets the cooldown of Blastoise’s other move and it changes the way it works.

For Hydro Pump, it makes it deal burst damage in a radial area around Blastoise and pushes enemies away.

For Water Spout, it changes it into a move that requires to be held to continuously activate, dealing damage per second around Blastoise.

It also changes Blastoise’s basic attacks to make it deal damage all around Blastoise.

Rapid Spin makes Blastoise Unstoppable during its duration so you can use it to absorb hindrances and override the slowing effect behind enemy goal zones.

When Rapid Spin is upgraded into Rapid Spin+, it grants a substantial amount of Def and SpDef, making it easier to penetrate the enemy lines without taking too much damage.

Has the user spout water to attack while spinning, throwing enemies in a large area. This also grants the user a shield.

Hydro Typhoon is a burst damage Unite move that also throws enemies around its area of effect.

You have to be careful when casting this Unite move as it has a short cast time that gives the enemy a short window to use their escape moves or Eject Button.

To avoid this, use Surf or Rapid Spin first to position yourself near enemies.

Hydrop Typhoon grants a shield after casting, making it a great clutch move especially when combined with Buddy Barrier and/or Score Shield.

Here are our Recommended builds on Blastoise

Rapid Spout turns Blastoise into a 1v5 carrying defender. Thanks to the high DPS output, mobility, and survivability due to the combination of Water Spout and Rapid Spin, Blastoise is able to carry games by itself.

Buddy Barrier grants HP and a substantial amount of shield once the trainer uses its Pokemon’s Unite move and Blastoise’s Unite move, Hydro Typhoon also grants a shield and so this Held item grants huge outplay potential to Blastoise thanks to the massive shield stacking.

Focus Band grants bonus Def and SpDef and it heals its user when its HP drops below a certain percentage. Due to Blastoise’s passive that grants bonus Attack and Sp. Attack when its HP is below half, it is best that Blastoise fights when low on HP and this Held item will make it safer to do so.

Wise Glasses grants a lot of SpAttack. This Held item will make you a tank that can also dish a lot of damage at the same time.

Eject Button can be used to the same effect and it also has more versatility because it can be used for offensive plays as well.

The Hydro Surf build is a more support and control-oriented build that focuses on helping your team through hindrances. This build deals less damage but is equally impactful as the other build, if not more because this build allows Blastoise to manipulate the movement of enemies.

Score Shield is used in this build instead of Wise Glasses because of the additional HP and shielding when scoring will help Blastoise to contribute more to his team in lieu of being a damage dealer.

Blastoise is usually played in the Top or Bottom lane with an Attacker or an All-Rounder but he can also be played in this lane with a Support thanks to his high damage.

He is also played in the Jungle or Middle lane by some trainers due to Blastoise’s unusually high damage and mobility for a Defender.

In the early game, be mindful of your empowered attack as it can push wild pokemon towards enemies and make it easier for them to steal the wild pokemon.

Always look for an opportunity to use the Skull Bash + Water Gun combo to push enemies towards your side of the map. This is best done when the enemy is low on HP and/or if your jungler is near.

Use Water Gun or Hydro Pump to push enemies away while your teammates are trying to score.

If you have an advantage in the early game, push your lead further by attempting to steal their fruits behind their goal zones using Skull Bash.

What is the role of Blastoise when taking objectives?

When Drednaw spawns, remember to rotate there fast and ping it so that your teammates will join you to secure the bonus XP and shield that Drednaw gives. In Drednaw fights, your primary role is to soak the damage of Drednaw and your secondary role is to pester enemies and prevent them from having an opportunity to steal your objective. These roles also apply when trying to take Rotom and Zapdos.

You’d want to be present in fights as much as possible in the middle of the enemy team and deal as much damage as you can while slowing them. Remember to utilize the cooldown reset of Rapid Spin by using Water Spout before activating Rapid Spin.

Try to fight around half health so you can utilize the bonus damage from Blastoise’s passive. To increase your chances of surviving while fighting at around half health, start to move towards your teammates or to a goal zone when your Rapid Spin is about to end.

Zone enemies away from your teammates when they are trying to score, or take Drednaw, Rotom, or Zapdos. Blastoise is great at zoning when using this build because Hydro Pump and Surf both have the capability to shove enemies away from the area you want to control.

Always look for the opportunity to use your moves to push a lone enemy into your team using the Eject Button as a tool to reposition yourself for better angles.

When is the best time to use the Hydro Typhoon Unite move?

Blastoise’s Unite move is best used in clutch situations when you are low on HP. Why? The lower your HP is, the stronger the damage of your Unite move will be. And when it happens, the enemy will most likely have low HP as well in those situations, increasing the likelihood of bursting them down. If there are any survivors, one combo will most likely be enough to finish them off.

Legends have it that the main cannon on the center of Blastoise’s shell is so strong, it can pierce through mountains.