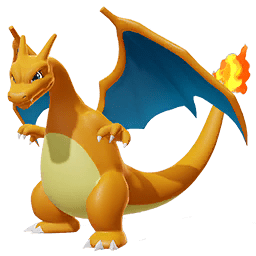 Best Charizard build guide for Season 1 in Pokemon Unite. With our Charizard guide, you will learn the best Held and Battle items to build, moveset, and how to use the moves of Charizard properly. Learn tips and tricks on how to play Charizard and counter your enemies.

While at half HP or less, critical-hit rate is increased.

Deals continual damage. Deals increased damage to enemies that are burned and increases in range when the user evolves.

Attack with a bursting flame. When this move hits, it leaves enemies burned and increases the user’s movement speed for a short time. 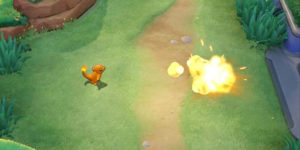 Flame Burst is a ranged move that deals good damage and burns enemies for more damage over time. It is great for knocking out wild pokemon and for stealing wild pokemon from enemies.

Attack with an intense blast of fire. When this move hits, it leaves enemies burned and increases the user’s movement speed for a short time.

Increased damage and the damage caused by burning. 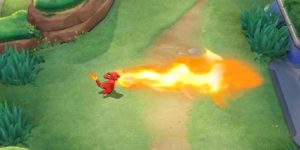 Flamethrower is a great ranged move that does not stop when it hits an enemy. It actually goes through its initial target until it reaches its maximum distance.

It is great for harassing enemies through wild pokemon and it can damage many enemies thanks to its piercing nature.

Punch with a fiery fist, dealing damage and shoving enemies when it hits. Also leaves the enemies it shoves burned. 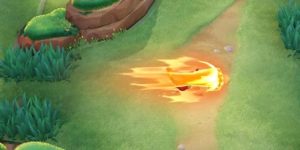 Fire Punch is a dash move that also damages and shoves all enemies hit by it. Since Charizard can move while attacking, you can easily reposition yourself to get behind your enemies and shove them towards your team.

You can also use Fire Punch to escape enemies by manually targeting it away from enemies.

Encircles enemies in the area of effect in a vortex of fire. After this move hits, it deals damage over time and decreases the movement speed of enemies for a short time. 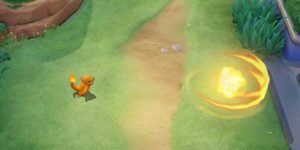 Fire Spin deals damage in an area. It is great for dealing damage to multiple pokemon or for zoning out an area, preventing enemies from going to an area without getting damaged.

Blasts intense, all-consuming fire, dealing damage over time to enemies while the flames continue to burn on the ground and decreasing the movement speed of enemies for a short time. 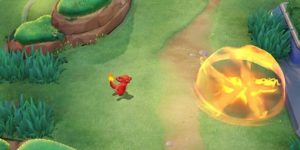 Fire Blast is the upgraded version of Fire Spin. It deals more damage to a larger area. It is more effective at dealing damage over time to enemies in an area and it is great for preventing enemies to move into an area without taking damage.

Thanks to its large area of effect, it is effective at preventing enemies from scoring in your goal zones.

Decreases movement speed of enemies for a short time when they are thrown. 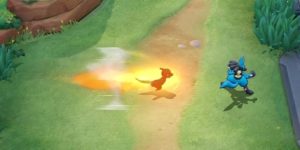 Flare Blitz is Charizard’s defensive hybrid ability. It is a hybrid ability because it can only be cast on enemies but when it is used, it also grants a shield to Charizard.

It synergizes perfectly with Fire Punch because it is easier to reposition yourself after using Flare Blitz to then shove enemies towards your team using Fire Punch.

Fly up into the air, allowing the user to move freely over obstacles. While this move is being used, basic attacks deal increased damage and leave enemies burned. In addition, when dealing damage to an enemy, recover HP. Using this move again on an enemy will grab it and slam it onto the ground.

The first part makes Charizard grab an enemy and slams them to the ground, interrupting whatever they are doing and dealing damage.

Afterward, Charizard flies, making it possible for him to fly over obstacles. It also increases his basic attack damage and makes it burn.

While flying, you cannot use your other abilities.

Here are our Recommended builds on Charizard

The Flamethrower Blast build is an offense-oriented build that turns Charizard into a ranged attacker with lots of ranged area of effect moves that are capable of damaging and burning enemies from a distance.

Muscle Band grants bonus damage to the user’s basic attack and Charizard is a Pokemon that relies on his basic attacks, especially while his Unite move is active.

Buddy Barrier grants lots of HP, synergizing with Charizard’s role as a front-line damager. The bonus shield on activation of its Unite move is a big plus as it will remove almost all counterplay against Charizard once it uses its Siesmic Slam.

Eject Button is a good all-around battle item that is useful for both offense, in chasing enemies, and defense, for escaping dangerous situations.

The Blitz Punch build turns Charizard into a melee brawler with good offense and defense. His two dash moves make it impossible to escape him and the Flare Blitz move grants him a shield, making him able to endure damage from enemy attacks.

Charizard uses the same Held and Battle Items from the Flamethrower Blast for the Blitz Punch build.

Charizard is usually played in the Bottom lane and sometimes in the Top lane or Jungle. It is best that Charizard is paired with a tank or a support since he requires levels to become more effective especially because his basic attack range increases as he evolves.

Both of Charizard’s basic moves are ranged so he is quite adequate in terms of laning as he can steal wild pokemon from enemies and he can deal some damage from a distance.

Even so, his all-in power can be quite lacking so avoid longer fights and focus on leveling up because you’d want to acquire Charizard’s unite move as fast as possible. Plus, he does not play well when behind so avoiding fights in the early game will mean avoiding them and potential experience points as well.

Charizard’s basic attacks deal more damage on burning enemies and enemies are burned through the moves so when uncontested, do not use the moves simultaneously. Instead, use one move on one wild Pokemon and use the other move on another wild Pokemon or at least wait for a couple of seconds before using another move.

Charizard can move while using its basic attacks. Try to take advantage of it by kiting burned enemies. This is especially easy to do against immobile tanks and supports like Slowbro and Mr. Mime.

What is the role of Charizard when taking objectives?

When Drednaw spawns, your role is to deal as much damage to it through moves and basic attacks. If you are using the Flamethrower Blast build, try to stay behind your team so you can deal damage safely from a distance, and if you are using the Blitz Punch build, look for an opportunity to jump on low HP enemies to take them down in the heat of the battle.

The Flamethrower Blast Build makes Charizard play like an attacker who fights from a distance.

When using this build, Charizard is able to apply burn to a match larger area. Because of large AoE moves, Charizard is able to deal damage per second to more enemy Pokemon but it comes with the cost of lacking mobility. So Charizard won’t be able to do much against other all-rounders or speedsters when they get close to Charizard unless its Unite move is available so try to fight safely behind your tanks or supports.

The Blitz Punch Build makes Charizard play like a speedster because both of its moves have a dash that can also interrupt enemies.

Aside from having mobility, this build also makes Charizard tankier as the Flare Blitz move grants a shield. So when using this build, Charizard can afford to play more aggressively. Thanks to the high amount of mobility, you will be able to hunt and be a threat to most attackers and you will have the upper hand against most Pokemon on 1v1s provided that you are equal or ahead on levels.

When is the best time to use the Seismic Slam Unite move?

Seismic Slam is one of the best Unite moves in 1v1s because it grants unparalleled mobility because of the ability to fly over terrain and it grants bonus damage and a one-time move that allows Charizard to slam down a single target.

Seismic Slam is best used to sneak up on team fights and assassinate the strongest enemy Pokemon. Charizard is one of the strongest Pokemon while Seismic Slam is activated. Lower down the HP of your target enemy before using the single-target portion of the spell to make the most out of it as its effect ends once you use the second part.

Charizard has flames that can melt boulders and massive glaciers. But even with its strength, it is an honourable fighter as it never turns its fiery breath on weaker opponents. A strong Charizard is also known to never needlessly show off its powers.