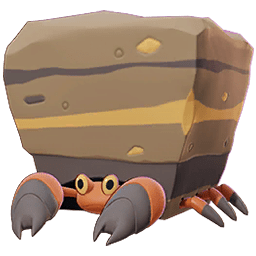 Best Crustle build guide for Season 1 in Pokemon Unite. With our Crustle guide, you will learn the best Held and Battle items to build, moveset, and how to use the moves of Crustle properly. Learn tips and tricks on how to play Crustle and counter your enemies.

When losing a certain amount of HP, Defense and Sp. Defense are increased. (Stacks up to 10 times based on remaining HP).

Becomes a boosted attack with every third attack. When this boosted attack hits, it deals damage to enemies in the area of effect and decreases their movement speed for a short time.

Drops large rocks on the designated area. When this move hits, it deals damage to enemies in the area of effect and leaves them unable to act for a short time. Rock Slide deals minimal damage but stuns enemies it hits. It is most useful for stopping enemies from stealing your wild pokemon or for keeping them from last hitting their wild pokemon so you can steal them.

Splits open the ground toward the designated area, dealing damage to enemies in the area of effect and creating a barricade of rock. Activating this move again removes the barricade.

Decreases the movement speed of enemies for a short time when this move hits. Rock Tomb creates a ripple in the ground that deals damage and at the end of that ripple it creates a barricade of rock.

It takes a while to master how to create barricades of rock the way you want to. Simply pressing the move will create the barricade before the target enemy and that will help the enemy escape.

If you want to lock an enemy inside the Rock Tomb, you have to manually aim it and you have to consider if your target enemy is currently moving.

Convert a set percentage of Defense and Sp. Defense into Attack and Sp. Attack and increase movement speed for a short time. Always cast Shell Smash before casting his other moves.

Shell Smash also increases the movement speed of Crustle so it is great for chasing or escaping enemies and it can be even used to steal Berries from behind the enemy’s goal zones.

Slashes enemies with claws, dealing damage to them. Hitting the same enemy multiple times in succession with this move increases the damage dealt. Throws many small rocks. When a rock hits an enemy or when the rocks have flown their full distance, a zone of many levitating rocks is created dealing slowly-increasing damage over time to enemies in the area of effect.

Increases the duration of this move’s effects and decreases the movement speed of enemies for a short time when this move hits. Stealth Rock deals damage over time over a large area. It deals increasing damage so it is best used in combination with Rock Tomb so enemies won’t be able to leave its damaging area.

Dash forward with crossed claws, dealing damage to enemies multiple times and shoving them. Leaves enemies unable to act if they hit an object when shoved. X-Scissor damages and shoves enemies. It deals a lot of damage when combined with Shell Smash.

It stuns enemies when X-Scissor shoves the enemies into an obstacle so you can use it in combination with Rock Tomb to consistently stun enemies.

You can use X-Scissor to zone out enemies out of your goal zones or you can use it to prevent enemies from reaching their goal zones so your allies can freely score on them.

Gain a shield for a short time and leave nearby enemies unable to act, dealing damage over time to them. If the user receives damage while this move is in effect, the move deals additional hits to nearby enemies.

Rubble Rouser is both an offensive and defensive Unite move.

When this Unite move is cast, enemies are stunned and are damaged. If Crustle is damaged while this move is active, it damages enemies even further.

Rubble Rouser also grants a substantial amount of shield to Crustle. This can be used to keep Crustle alive and it can also be used to prevent enemies from interrupting Crustle from scoring.

When combined with Score Shield, it is almost impossible to stop Crustle from scoring.

Here are our Recommended builds on Crustle

Shell Scissor enables Crustle to deal damage to enemies, especially when he is low in HP because Shell Smash will convert larger amounts of defenses into damage that in turn will make X-Scissor hurt a lot.

Scope Lens grants bonus critical-hit rate and critical-hit damage. X-Scissors can crit and when used it is used after Shell Smash is used, especially when at low HP, it can potentially deal a lot of damage.

Score Shield makes it hard for enemies to interrupt Crustle when he is scoring because it grants a shield while scoring and it stacks with any shield that the user already has so it synergizes with Crustle’s Unite move and Buddy Barrier.

X Attack grants bonus damage and when it is used while Crustle is low on HP, it will make Crustle deal surprising amounts of damage with Shell Smash and X-Scissor.

Tomb Scissor is great for controlling areas because Rock Tomb can be used to create an obstacle that is useful for keeping enemies away from goal zones or battle areas. It can also be used to keep them from escaping and X-Scissor synergizes with Rock Tomb because enemies are stunned when X-Scissor successfully shoves an enemy into an obstacle.

Buddy Barrier grants a bonus shield to the user and the lowest HP ally when the user activates their Unite move. Rubble Rouser already grants a substantial amount of shield and with Buddy Barrier, Crustle becomes impenetrable.

Eject Button is used in this build because you’d want to quickly get to certain areas when trying to control the battlefield. You may also find yourself overextended when trying to zone out enemies so Eject Button can be used to escape when that happens.

Crustle is a high damage defender. Crustle’s moves interact with the Scope Lens Held item, allowing Crustle’s moves to crit, making it possible for Crustle to deal huge amounts of damage even if it is a tank.

Crustle is usually played in the Top or Bottom lane while partnered with an attacker or all-rounder. Crustle’s basic moves, Rock Slide and Fury Cutter makes it fairly competent in terms of contesting wild Pokemon.

Its Rock Slide stuns enemies it hits so you can use it to zone enemies or prevent them from stealing wild Pokemon for your team. It is also great for setting up ganks for your middle laner. While its Fury Cutter increases its damage when enemies are already marked. To increase your chances when stealing Pokemon, immediately use Fury Cutter on the contested wild Pokemon and then save the next cast of the said move for the last hit attempt.

Crustle’s passive, Sturdy increases its defenses when its HP is low. Due to its passive, Crustle is great at clutching close fights, especially when Shell Smash is used as it converts the bonus defenses into damage.

Shell Smash also makes Crustle unstoppable. This makes Crustle one of the most effective berry stealers in the game. Simply walk past their goal zones and use Shell Smash to gain increased movement speed and unstoppable status so you can easily steal their berries.

What is the role of Crustle when taking objectives?

Crustle’s is a great area controller that also deals a lot of damage. The role of Crustle when taking Drednaw, Rotom, Zapdos, and also when trying to score or defend, is to get into right in the middle of the enemy team and restrict their movement using Shell Smash and X-Scissors or by using Stealth Rock and Rock Tomb.

The Shell Scissor build is the popular build for Crustle because it makes it equally hard to kill and capable of dishing out lots of damage.

You should run straight into the enemy team as it is more advantageous for it to play while low in HP. Once Crustle’s HP is below half, each cast of Shell Smash into X-Scissor will deal so much damage. It can even one-shot squishy Pokemon if all hits crit.

Of course, in the end, you are still playing a tank so do not overextend and over chase enemies. Play smart and as much as possible, use X-Scissor to push enemies to where you want them or better yet, push them into a wall to stun them.

The Tomb Scissor build takes advantage of the fact that X-Scissor stuns enemies when Crustle successfully pushes an enemy to a wall. Tomb Rock creates an obstacle that sets up the wall needed for X-Scissor.

This build deals less damage than the other build but it is the more consistent option for area control as you can also use Tomb Rock to keep enemies inside or away an area. If you are playing with teammates you know who are capable, this build will give you more flexibility for organized play.

When is the best time to use the Rubble Rouser Unite move?

Rubble Rouser is best used once Crustle is at low HP. Its high shield amount, especially when combined with the Buddy Barrier Held item, is usually more than enough to keep Crustle alive for prolonged periods. Plus, if you use this Unite move while Crustle is low on HP, you will be able to utilize the effect of Shell Smash to its maximum potential and you will be able to deal some serious damage with X-Scissor and from the Unite move itself.

Contrary to the effect of Shell Smash, Crustle becomes weak and unsure of itself once its shell breaks.