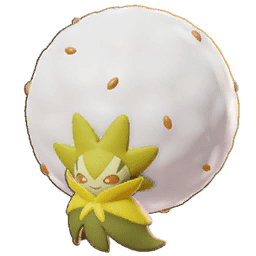 Best Eldegoss build guide for Season 1 in Pokemon Unite. With our Eldegoss guide, you will learn the best Held and Battle items to build, moveset, and how to use the moves of Eldegoss properly. Learn tips and tricks on how to play Eldegoss and counter your enemies.

Becomes a boosted attack with every third attack, attaching a bit of cotton fluff to the enemy. The user's basic attacks against an enemy with cotton fluff on it deal increased damage and decreases the enemies movement speed for a short time.

Pelt the target with leaves, decreasing the movement speed of enemies for a short time when it hits. 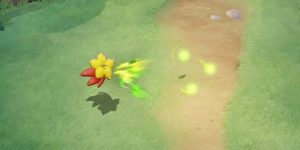 Leafage deals some damage and slows down enemies. Use it to help your lane partner knock out wild pokemon and use it on enemies to slow them down.

Throws a Pollen Puff, which attaches to an enemy. The Pollen Puff restores HP for allies and deals damage to enemies. 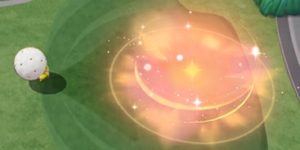 Pollen Puff attaches to an ally or an enemy. After a short delay, it explodes, dealing damage to enemies and healing allies.

It is best to attach it to melee pokemon because they’ll be able to receive more damage thanks to the heal and they are already close to enemies, making Pollen Puff deal damage to them too when it activates.

You can attach Pollen Puff to yourself by targeting the ground near you and walking to it.

Attack with a tornado of sharp leaves, leaving a path in its wake that increases ally movement speed for a short time.

Also decreases the accuracy of enemies for a short time when this move hits.

Leaf Tornado deals damage to a line and the tornado stays at the end of its range, dealing some more damage.

What’s great about Leaf Tornado is that it is a rallying move that increases the movement speed of allies that walks through its path. It makes it easier for your allies to initiate fights and chase enemies.

Once upgraded into Leaf Tornado+, it becomes a counter to strong basic attackers like Machamp and Cinderace because it decreases their hit rate.

Restores the HP of the user and nearby allies. 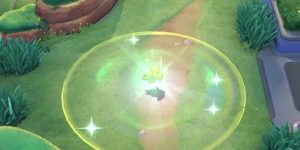 Synthesis is a simple healing move. Always use it near allies to maximize the benefits from it.

Protects the user and nearby allies with cotton. The cotton absorbs damage and when the move ends, the cotton restores some HP.

Also increases the user’s movement speed while using this move. 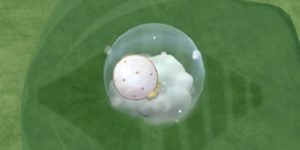 Cotton Guard grants a shield to you and all nearby allies. After the move ends, it also heals you and your allies.

Cotton Guard is great for saving allies and offensively, you can use it to avoid being interrupted while you and your allies attempt to score. 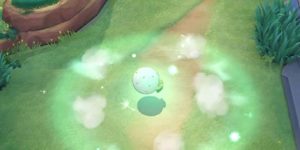 Cotton Spore increases your movement speed and after a short delay, you will deal damage around you, throw affected enemies, and slow down their movement for a short while after.

Once upgraded into Cotton Spore+, you will receive damage reduction during the first portion of the move.

Float into the air and become invincible. If used again, pound the ground, attacking and shoving enemies and restoring HP to allies in the area of effect.

Cotton Cloud Crash has two parts. The first part turns Eldegoss invincible and makes him float, allowing him to move to where he wants to. When this is activated, it also activates Cotton Spore immediately, damaging and throwing enemies.

Once reactivated, Eldegoss pounds the ground, damaging and shoving enemies and healing allies. This is perfect for area control when trying to take Rotom, Drednaw, or Zapdos, or when trying to defend goal zones or when you and your team are trying to score.

Here are our Recommended builds on Eldegoss

Exp Share is important for Eldegoss because as a support, Eldegoss does not want to last hit wild pokemon and Exp Share incentivizes just that. When Exp Share is equipped, allies near the user who last hits wild pokemon gains bonus Exp, and when its user has the least exp among its team, they gain bonus passive exp. This will help you are your lane partner gain a level edge over your enemy laners.

Energy Amplifier grants cooldown reduction and increases the rate its user’s Unite move is charged. This allows Eldegoss to use their moves more often so they can be more impactful as a support.

Buddy Barrier adds an additional layer to Eldegoss’s Unite move as it grants a shield to him and to the lowest HP allied pokemon. You will be in the middle of a fight after using the second portion of Cotton Cloud Crash and so the shield will help you get back to the backline safely.

Eject Button is necessary for Eldegoss because enemies would want to knock you out first due to your strong healing and shielding capabilities that will make your allies harder to defeat. Eject Button will help you escape enemies easily thanks to the instant short teleport.

The Tornado Spore build is an offensive support route for Eldegoss. The bonus movement speed and hit-rate debuff from Leaf Tornado are great for fights and Cotton Spore is an area hindrance that is annoying for your enemies.

This build uses the same Held and Battle items as the Pollen Guard build.

Eldegoss is a traditional support that focuses on healing and shielding allies or buffing allies and debuffing enemies at the same time.

In the early game, focus on securing wild Pokemon for your lane partner through basic attacks and through Leafage. Do your best not to land the knocking blow to wild Pokemon so that your ally is the one who will receive the higher experience points, more so if you are equipped with the Exp Share Held item that increases the Exp your ally receives when knocking out Wild Pokemon.

Do not worry about being behind levels as Eldegoss does not need to stat check (the way of comparing your level against the enemy) because Eldegoss does not fight enemies directly. Eldegoss wins the game by enabling its teammates.

Remember to always be near your teammate if you plan to use Eldegoss’s Synthesis so both you and your ally will benefit from the healing.

What is the role of Eldegoss when taking objectives?

The role of Eldegoss in big fights, especially when taking Drednaw, Rotom, or Zapdos, is to keep allies alive and heal them so that the longer the fight goes on, the bigger your team’s advantage becomes.

Stay behind your allies since your heals are going to be annoying for them and your team won’t be able to survive for longer once you are taken out of the equation.

The Pollen Guard build is the traditional support build. Pollen Puff heals allies and damages enemies and once upgraded also reduces the damage taken when attached on allies and deals damage over time on enemies. Cotton Guard on the other hand shields Eldegoss and nearby allies and increases their movement speed then heals them after the duration.

Always be alert so that you will know the best time to use Cotton Guard. You have to learn when fights are going to break out and always react fast when enemies use damaging move so you can shield yourself and your allies.

In the late game, it is best to use Pollen Puff on melee damagers like Machamp, Lucario, or Garchomp who just loves to place themselves in the middle of the battlefield.

The Tornado Spore build is the offensive support build of Eldegoss. Keep in mind that even if we used the term “offensive” here, it doesn’t mean that Eldegoss would be able to do plays without its teammates.

Use Leaf Tornado to help your allies start a fight thanks to bonus movement speed. Once a fight breaks out, use it on basic attack reliant enemies like Cinderace or Absol because it will decrease their hit-rate and therefore their damage output.

Be careful when using Cotton Spore as it requires Eldegoss to get close to enemies. It is usually better used as a follow-up move to your allies because Eldegoss is not as tanky as defenders and so avoid starting a fight by yourself.

When is the best time to use the Cotton Cloud Crash Unite move?

The best time to use the Unite move of Eldegoss is near the end of fights when both your allies’ and the enemies’ HPs are low. The reason for this is that Cotton Cloud Crash deals damage to enemies and shoves enemies and at the same time it heals allies, which easily puts the advantage to your team.

The first cast of Cotton Cloud Crash makes Eldegoss fly above obstacles and it also turns it invulnerable. This will enable you to escape then position yourself perfectly for the second cast.

The cotton of Eldegoss is mixed with the cotton of Cottonee to form a cloth that is popular with many luxury brands. The cotton fluff of Eldegoss contains tiny seeds that is both beneficial to Pokemon, humans, and the soil.