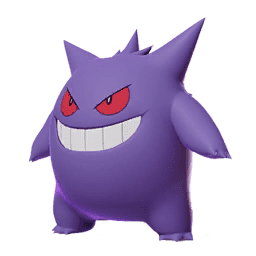 Best Gengar build guide for Season 1 in Pokemon Unite. With our Gengar guide, you will learn the best Held and Battle items to build, moveset, and how to use the moves of Gengar properly. Learn tips and tricks on how to play Gengar and counter your enemies.

Increases movement speed when out of combat. (8s after leaving combat)

Becomes a boosted attack with every third attack, lunging at an enemy and dealing damage.

Shoot multiple sinister flames, dealing damage to enemies and leaving them burned when it hits. Will-o-Wisp will help you knock out wild pokemon in the early game. Use it at melee range so will deal damage by hitting the wild pokemon with two flames.

You can use this move in combination with Lick so you can hit enemies at melee range without risking yourself.

Hurl a shadowy blob at the target, decreasing the movement speed and Sp. Defense of enemies for a short time when it hits. Shadow Ball deals average damage from a distance and it decreases the movement speed and special defense of enemies it hit, making it a great move for harassing enemies and supporting your allies.

Hurl unsanitary sludge to the designated area, leaving enemies poisoned when it hits. Sludge Bomb deals damage over time to enemies hit in its area of effect.

The damage over time is considered a status effect for reducing the cooldown of Hex so always use Sludge Bomb before casting Hex so it will deal more damage and have a lower cooldown.

Attacks with the user’s tongue and pulls enemies toward the user.

Lick deals some damage and pulls the enemy it hits. Lick is great for pulling enemies towards your team when you are ganking.

You can also use Lick to steal wild pokemon from your enemies and it will increase the damage of Will-o-Wisp because it will put your target into melee range.

Puts enemies to sleep when it hits. If used again while a nearby enemy is asleep, the user appears behind the target and attacks, restoring HP and reducing the cooldown of Shadow Ball or Sludge Bomb. Dream Eater is a ranged hindrance move. Enemies hit are put to sleep and Gengar gains a boosted attack.

Dream Eater can be used again to teleport behind the sleeping enemy and deal damage, heal Gengar and reduce the cooldown of his other move.

Remember to use Gengar’s other move before teleporting with Dream Eater so you will be able to use the cooldown reduction from this move.

Disappear and move to the designated location, dealing damage to enemies in the area of effect when the user reappears. If this hits an enemy that is afflicted by a status condition, it deals increased damage and its cooldown is reduced. Hex is Gengar’s main damaging move. It teleports him to his target location or enemy and damages them. If they are afflicted by status effects at the moment the move hits, it deals more damage and its cooldown is greatly reduced.

The status effect usually paired with Hex is the poisoned effect from Gengar’s own Sludge Bomb. But it also works with other status effects except for slows and defense reduction. This is the reason why Shadow Ball does not reduce the cooldown of Hex.

You can also use Hex to escape but you will be unable to fight back for a while if you use it to escape because it will go on its full cooldown if this move does not hit anyone with a status effect.

Jump to the designated area and start sneaking with increased movement speed. If this move is used again, it deals damage to enemies in the area of effect and decreases their movement speed for a short time.

You can use Phantom Ambush again while buffed to deal damage around Gengar and slow down affected enemies.

The second cast of Phantom Ambush is best used after teleporting using Hex or Dream Catcher to increase your chances of hitting enemies.

Here are our Recommended builds on Gengar

Hex Bomb is very effective at assassinating enemies thanks to the high damage and high mobility combination of Sludge Bomb into Hex spam. You have to be careful though because you do not have any healing or defenses with this build and so if you miss either Sludge Bomb or Hex, you will have reduced mobility and you will become vulnerable to enemy attacks, especially if your Eject Button is on cooldown.

Wise Glasses grants the highest amount of special attack. This Held item is perfect for Gengar since he relies heavily on his moves.

Choice Specs applies bonus special attack damage to your next basic attack after landing a move. With this Held item, you’d be doing even more burst damage.

Eject Button is your emergency button because as mentioned, this build is a high-risk build and if you miss your Sludge Bomb or Hex, you will need the Eject Button to escape enemies.

The Shadow Eater build is able to deal good amounts of damage, not as much as the Hex Bomb build but this build grants more utility. The Shadow Ball move slows down and lowers the special defense of enemies, making them more vulnerable to special attacks. Dream Eater puts enemies to sleep so they can be easily burst down by Gengar and his team.

This build uses the same Held items and Battle items as the Hex Bomb build.

Gengar is a burst damage mobile speedster. It relies on teleportation and resets to spoo enemies, bursting them down while they are surprised, leaving them with little chance to retaliate.

Gengar is a middle laner that excels in ganking once it has two upgraded moves. So, before you reach level 7, focus on farming as much experience points as possible to reach level 7 faster than the enemy middle laner.

Once the match start, acquire Will-o-Wisp then head straight into the Lillipup at the edge of the center area. Use the Eject Button to quickly get over to the other side instead of walking around the obstacles. This is important to do because Gengar has two contradicting weaknesses:

Clear all four wild Pokemon in your side of the center area. Be sure to avoid the moves of Ludicolo and Bouffalant because Gengar has low HP and their moves can do some damage. Be careful when using Lick on them because it does not cancel their moves even if it displaces them.

Remember that in 8:50, the Vespiquen and its swarm of Combees are going to spawn at the middle of the Top and Bottom lanes. Help one of your laners, preferably the stronger side, to secure them so you will have the upper hand in terms of levels.

Once you reach level 7, begin to wreak havoc across the map. Alternative between ganking and acquiring the buffs from Ludicolo and Bouffalant.

Do not stay in a single lane when ganking, Gengar’s passive, Levitate will make it easy for you to gank one lane then move to the other.

What is the role of Gengar when taking objectives?

Gengar is a burst damage speedster. It has the capability to take down even the toughest tanks but Gengar can also be killed quickly while suffering from a hindrance move.

Because of this fact, it is important that Gengar waits for enemies to unload their moves first before entering the fight so the enemy won’t have a chance to burst down Gengar while unleashing its burst damage.

Gengar also deals considerable damage so you can also use its abilities to try to land the last hit on Drednaw, Rotom, or Zapdos.

The Hex Bomb build is the infamous build that can potentially 1v5 enemies with its burst damage resets and invincibility frames or I-frames for short.

The crucial thing to note when using this build in the middle and late game is that you have to wait for enemies to wait to use their hindrance moves and to not spam Gengar’s moves blindly.

You can use the I-frames to finish fights without being touched by enemies if you are proficient enough and be patient when using the moves to lessen the chance of being punished for not being able to reset Hex due to misplays.

The Shadow Eater build does not deal as much damage as the Hex Bomb build but it is much more effective in 1v1s because Shadow Ball is ranged and Dream Eater can put enemies to sleep. It leaves little room for enemies to counter Gengar if played correctly.

Do not overextend in fights when using this build. Stay close to your allies because this build lacks a mean to escape and Gengar is vulnerable while its moves are on cooldown.

When is the best time to use the Phantom Ambush Unite move?

Phantom Ambush is best used after a fight started so you can easily flank the enemy’s backliners and burst them down. The bonus movement speed will help you quickly get to enemies even while going the long way, away from enemy front liners.

Be careful though, enemies can still see you and can still damage you while using Gengar’s Unite move.

Gengar can be quite mischievous. It can pretend to be someone’s shadow and make it move erratically, frightening the victim.