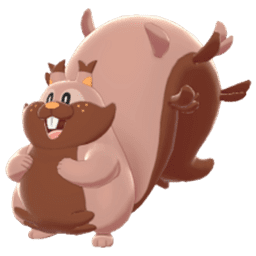 Best Greedent build guide for Season 1 in Pokemon Unite. With our Greedent guide, you will learn the best Held and Battle items to build, moveset, and how to use the moves of Greedent properly. Learn tips and tricks on how to play Greedent and counter your enemies.

When the Pokémon eats a Berry, it also recovers HP after receiving the original effects of the Berry. At the same time, it stealthily stashes another Berry in its tail. Being hit by a single attack or combination of attacks will cause a Berry to drop from the Pokémon’s tail.

Becomes a boosted attack with every third attack, dealing increased damage when it hits and causing one Berry to drop from the user's tail.

Has the user leap to the designated area, dealing damage to opposing Pokémon in the area of effect and decreasing their movement speed for a short time. If this move is used while Covet is active, no area can be designated for the user to leap to. Instead, while the user is running, damage is dealt in an area to opposing Pokémon in front of it. If the user has any Berries stashed in its tail at this time, it consumes all of them. The more Berries the user had stashed away, the more this move’s cooldown is reduced. Tackle is your go-to move in the early game. It is a dash that deals damage in a straight line.

You can use it to steal wild Pokémon or escape enemies. Try to stash as much Berries as possible so that this move’s cooldown will be reduced.

If you use this move while Covet is activated, it functions like a lesser version of Belch.

Has the user spit Berry seeds in the designated direction, dealing damage to opposing Pokémon in the area of effect and decreasing their movement speed for a short time. The more Berries the user had stashed away, the more damage this move deals. It is best used against enemies who you are chasing or kiting together with your teammates.

It deals more damage while you have Berries so use it after activating Stuff Cheeks or Covet and the most damage it deals is on its initial cast as the move continuously consumes berry.

When combined with Covet, you will be able to move and knock up enemies while slowing them down, increasing your team fight control potential.

Deals damage to opposing Pokémon in the area of effect and decreases their movement speed for a short time. If the user has any Berries stashed in its tail at this time, it consumes all of them. The more Berries the user had stashed away, the more this move’s cooldown is reduced. Belch is an area burst damage move. After a short delay, Greedent belches in front of it, damaging and slowing enemies hit.

When Belch is cast during Covet, Greedent still moves during the delay so you can pre-cast it to hit enemies not yet within reach.

Belch can be repositioned using Eject button. Use this trick to follow enemies who dashed in order to avoid Belch.

Grants the user a shield for a short time. In addition, a Berry will drop in front of the user. Use Defensive Curl to sustain yourself against damage in the early game. It also synergizes with Score Shield, giving more time to score even in front of an enemy.

Has the user drop several Berries, which can be eaten to recover HP. Any HP recovered that exceeds the user’s max HP will be converted to a shield effect. If the user catches sight of a Berry while using this move, its movement speed is increased for a short time.

Upgrade: Increases the number of Berries the user drops from its tail. Stuff Cheeks is a sustain move. It drops a lot of Berries for you or your allies to eat. Be careful though, your enemies can also eat the berries. So, make sure to face a safe spot, near your allies when casting this move.

Make sure to cast Stuff Cheeks before casting Greedent’s other because they benefit from having more Berries in stash.

Use Stuff Cheeks to chase or get away as it gives a short movement speed burst when cast.

Upgrade: Increases damage dealt by this move and increases the frequency at which Berries drop. Covet makes Greedent move continuously while dropping Berries. During this time, enemies colliding with Greedent are damaged and thrown.

Greedent has limited turn rate during this move so it can be hard to control in fights and tight spaces but when used properly, it turns Greedent into an annoying hindrance machine.

Furthermore, Tackle, Belch, and Bullet Seed may be used during this time. You can control the direction where these move hits using the left analog stick.

Thanks to the unstoppable status, you can safely steal Berries from enemy goal zones.

Has the user eat a Berry to recover HP and then leap to the designated area, dealing damage to opposing Pokémon in the area of effect and throwing them. The user then eats a special Berry, allowing it to stash an unlimited amount of Berries in its tail for a short time and resetting the cooldown of all its moves.

Berry Belly Flop has two parts. First, it heals Greedent and after a short delay it deals damage to the target area and throws enemies.

Afterwards, it buffs Greedent to have unlimited Berries. During this time, Bullet Seed always deal maximum damage and Belch has no cooldown.

Use the buff to absolutely decimate the enemy team.

Here are our Recommended builds on Greedent

The Belch Stuff build makes Greedent a force to be reckoned with both in terms of offense and defense. This is a very versatile build as it allows Greedent to function effectively both as a tank and as a damager.

Muscle Band grants bonus damage on basic attacks based on the current HP of the target. This allows Greedent to farm faster and hit enemies harder.

Focus Band heals its user once its HP drops below a certain percentage. Greedent already has a ton of sustain. This Held item just makes it more frustrating for enemies to kill Greedent.

Buddy Barrier grants a shield to its user and the lowest HP ally. The bonus shield will make you unstoppable while casting unlimited Belches.

Eject Button is necessary for Greedent since it does not have any mobility move while using this build.

The Covet Bullet Build is a support and defender-focused build. Both Covet and Bullet Seed apply hindrances to enemies, making them great for controlling the battlefield by annoying enemies.

Energy Amplifier will allow Greedent to spam its Unite move, Berry Belly Flop once or twice more than usual. This is game-changing Unite move can help swing fights to your favor thanks to the unlimited berries and buddy barrier shield. This is also a viable Held Item when using the Belch Stuff build in lane.

Greedent is a versatile defender with lots of sustain. It can either be played to deal so much damage, apply lots of hindrances and Greedent can even heal its allies!

Greedent can be played in any lane and can function well while ahead or behind levels.

Use Greedent’s basic move, Tackle to secure wild Pokémon, especially the ones contested in the middle part of the lanes. Do not worry about contesting wild Pokémon since Greedent has a lot of sustain thanks to its passive, Cheek Pouch that drops Berries when Greedent is damaged. Its boosted attack also makes Greedent drop Berries that can heal it or its allies.

What is the role of Greedent when taking objectives?

Unlike other defenders, Greedent is better suited at taking the objectives instead of zoning for teammates. With the help of its Unite move, Berry Belly Flop and Belch, Greedent can deal so much damage during its duration.

However, if you are using the support build, especially with Bullet Seed, you might be better of supporting the defender who is trying to zone out the enemy team.

The Belch Stuff build allows you to deal burst damage with Belch and also heal allies using Stuff Cheeks. Because of these, it is best to assist in the front side together with a defender who hopefully has reliable hindrance moves so that you can easily burst down enemies with your double Belch combo.

And do not be selfish with your Berries. If you see allies that are low on health, throw them your Berries using Stuff Cheeks.

The Covet Bullet build is more of an offense oriented support. It focuses on dealing consistent damage and hindrances on enemies through using Bullet Seed while Covet is active.

On team fights, you can either initiate or be a follow up to your initiator who’s goal is to knock up, slow, and damage the enemy team consistently.

When is the best time to use the Berry Belly Flop Unite move?

Berry Belly Flop is best used on objective fights where the enemy team are grouped up together so you can deal so much damage to them in a short duration.

Or, if the enemy team is late to rotate, you can activate Greedent’s Unite move immediately so you can sneakily take down the objective fast together with your team.

Greedent’s name comes from the word Greed which means intense and selfish desire. Greedent’s intense desire is its desire for berries. Greedent stuff their tail with so much berries that it does not even notice that berries are already falling, although its dimwitted nature might be also a cause to this.