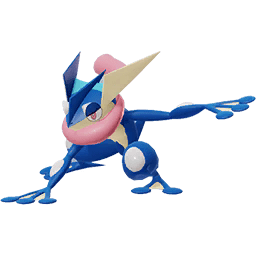 Best Greninja build guide for Season 1 in Pokemon Unite. With our Greninja guide, you will learn the best Held and Battle items to build, moveset, and how to use the moves of Greninja properly. Learn tips and tricks on how to play Greninja and counter your enemies.

While HP is at 50% or less, Attack and movement speed are increased.

Attack with a spray of bubbles, decreasing the movement speed of enemies when it hits. Bubble will help you clear out wild pokemon fast and since it is a ranged move, you can use it to steal wild pokemon from enemies. The movement speed slow can also help you chase down or deter enemies from moving in.

Increases the number of shurikens thrown. Water Shuriken is your long range damaging move. This move will allow you to damage enemies from a distance and if you hit all shuriken on a single enemy, you will deal a significant amount of damage.

The shurikens will be thrown in a single direction so you have to anticipate where the enemy is going to escape in order to make the most out of this ability. You will have bonus movement speed while this move is active so you will be able to follow the enemy will trying to hit them.

Water Shuriken can be used defensively. The bonus movement speed will make you hard to chase and enemies will be discouraged from chasing you because they will be damaged by the shurikens if they do. Furthermore, if the shurikens hit enemies while chasing you, you will be healed.

Increases the amount of HP restored. Surf is the assassination move alternative to Water Shuriken.

Surf is a dash that deals more damage the lower the HP of your target enemy. If the enemy is killed using Surf, its cooldown is reset. Plus, Surf also heals Greninja if it deals damage to an enemy.

Surf is best used together with Smokescreen because Greninja becomes invisible while using Surf and if the enemy is near you when you cast Smokescreen, that enemy’s vision will be compromised, disorienting them and making them easier to knock out.

Leaves behind a substitute doll for the user while it’s moving forward. Substitute is a dash that leaves behind a dummy. You can use this move to escape or chase enemies.

Quickly moves the user away from the current position, creating illusory copies of it to aid in battle. Double Team is a dash that creates copies of you. You can use it to chase enemies if you choose to dash forward but it is best used to disorient enemies when trying to escape.

The copies will use Greninja’s other move on the nearest enemy and then use basic attacks on them afterward. It deals 25% of Greninja’s damage output.

Creates a smokescreen and has the user roll away from its current location. Immediately afterward, the user begins sneaking and has its movement speed increased for a short time. This also makes its next basic attack a boosted attack.

Increased attack for a short time when the user stops sneaking. Smokescreen is also a dash move but it also creates a field of smoke that reduces the vision and disorients enemies inside it.

Once Smokescreen is cast, Greninja becomes invisible for a short period of time and its movement speed is increased. Greninja’s next attack also becomes boosted and once this move is upgraded into Smokescreen+, Greninja’s attack speed is also increased after sneaking.

Waterburst Shuriken is an area Unite move that deals a lot of damage and has a lot of offensive utility at the same time.

First, it makes Greninja jump to the target location and deal damage and slow enemies. You can use Waterburst Shuriken to jump over thin walls.

After a short delay, enemies are damaged again and are thrown for a short while. You have to carefully target this Unite move to the center of the fight to make full use of it.

After the move ends, Greninja will land at the direction you are moving towards so have your analog stick pointing towards your chosen location even before the move ends.

Here are our Recommended builds on Greninja

Smoke Shuriken is a long range attacker build with lots of means to outplay enemies. Water Shuriken can be used while moving and heals Greninja when it hits enemies, making it hard for enemy pokemon to fight back against you, especially the melee ones. Smokescreen will be mostly used to escape and disorient enemies with this build because you are going to be wanting to keep your distance when using this build.

Focus Band grants bonus HP regeneration when you are low on HP. Greninja’s passive grants increased damage and movement speed when below 50% health and so Focus Band will help you maintain your HP below 50% while being relatively safe.

Float Stone grants bonus attack and movement speed. Greninja relies on mobility to kite enemies and keeps his distance and the bonus movement speed from this Held item will help with that.

Eject Button is your emergency button while you are in a dangerous position. With Greninja, you’d want to maintain below 50% for the damage bonus but this makes you susceptible to burst damage. This battle item will make sure you will live when enemies attempt to burst you down.

The Smoke Surf build turns Greninja into a melee assassin. This build deals more burst damage than the first build but it is riskier to run and it deals less consistent damage per second compared to the first build. Smokescreen is used more offensively in this build to get close to enemies and Surf will be your main assassination tool. If Surf takes down the enemy, its cooldown is reset to help Greninja’s smooth escape.

This build uses the same Held and Battle items as the Smoke Shuriken build.

Greninja is an attacker-speedster hybrid. Its kit allows for a lot of outplay for both long range and short range battles.

Greninja’s kit allows the trainer to choose whether wants to play Greninja as an attacker or a speedster. Its boosted attack slows down enemies on long range attacks and a boosted attack at melee range deals execute damage, which means that the lower the HP of the target enemy is, the stronger the melee boosted attack becomes.

As you become a more proficient Greninja trainer, you will be able to switch between Greninja’s long range and melee fighting styles according to what is best in any given situation. For example, you can start a fight at long range then once Greninja’s torrent activates when it HP drops below 50%, you go into melee mode to surprise enemies with the bonus damage from the passive and the boosted melee attack.

What is the role of Greninja when taking objectives?

You can also use Smokescreen to limit the enemy’s vision while taking an objective so you will decrease their chances of securing the objective for themselves.

The Smoke Shuriken build is the attacker build for Greninja. Water Shuriken deals a lot of damage from a distance, heals Greninja for each successful hit, and even grants bonus movement speed for Greninja. The Double Team grants mobility through the damage, some AoE damage through the copied Water Shuriken, and a lot of confusion for the enemy team.

When using this build, play safely from a distance and only try to get close to execute enemies if there are more allies than enemies and if Greninja’s Double team is available for use, just to be always on the safe side.

The Smoke Surf build is the speedster build for Greninja. Surf is a dash that can execute enemies and on successful executions, its cooldown is reset. Smokescreen, on the other hand, is an area hindrance move that limits the vision of enemies in the area and makes Greninja dash a little.

Wait for enemies to be low enough before going in so you can have Surf resets. You can either use the reset to dash out or to jump into another enemy.

When is the best time to use the Waterburst Shuriken Unite move?

Greninja is a Pokemon that is strong at 1v1s but its Unite move is best used in team fights.

Waterburst Shuriken is best used on grouped up enemies as its damage and knock up can easily turn around a losing battle into a winning one. After successfully hitting enemies, press your movement button towards low HP enemies so you can proceed to burst them down one by one.

The Shurikens that Greninja throws are made of compressed water. It can even cut steel.