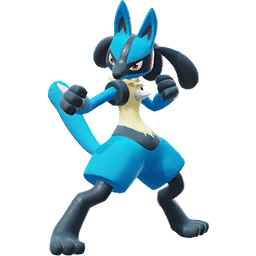 Best Lucario build guide for Season 1 in Pokemon Unite. With our Lucario guide, you will learn the best Held and Battle items to build, moveset, and how to use the moves of Lucario properly. Learn tips and tricks on how to play Lucario and counter your enemies.

While at low HP, gain a shield and increased movement speed.

Becomes a boosted attack with every third attack, performing a combo attack with a bone. Deals damage to enemies in the area of effect and throws them.

Has the user lunge forward at a speed that makes it almost invisible, dealing damage to enemies it comes in contact with. 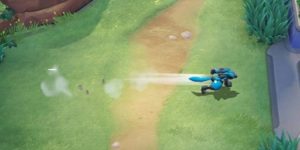 Quick Attack is a dash that also damages enemies. Use it to move across the map quickly and use it to reposition yourself during fights.

Charge forward with breathtaking speed. If this move hits an enemy from point-blank range, its cooldown is reset and it restores the user’s HP. However, the cooldown cannot be continually reset by using this move on the same enemy multiple times in succession.

Increases Attack for a short time when this move is used. 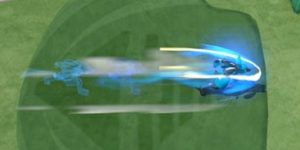 Extreme Speed is a damaging dash that can be used multiple times in quick succession. You can use it twice on a single target before going on cooldown.

If you hit two enemies and one of them has a blue circular aura, Extreme Speed will not go on cooldown.

Get creative and use it on different enemies in quick succession to confuse enemies and damage them while evading their attacks. You can alternate targeting enemy pokemon and wild pokemon to move across the battlefield.

Once you have Bone Rush, you can use Extreme Speed three times on one enemy. The combo goes like this:

Once you have Bone Rush+, you will be able to use Extreme Speed one more time. The combo turns into this:

Charges power before unleashing a powerful attack. While the user is charging power, its movement speed is decreased but its Attack slowly increases and the damage it receives is reduced. The user then charges in the designated direction and releases this move, dealing more damage the lower the enemies remaining HP is. The next basic attack becomes a boosted attack if the move hits. This move’s cooldown is reduced every time one of the user’s moves hits. 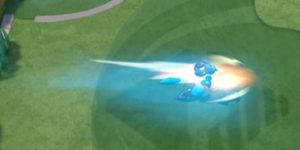 Power-Up Punch is a charged dash move that deals more damage the longer it is charged and the lower the enemy’s HP is.

While charging, Lucario has reduced movement speed but he also gains damage reduction. If you cannot avoid an enemy move, charge up Power-Up Punch so you will receive less damage.

Charge Power-Up Punch inside tall grass so you can surprise enemies with your burst damage.

The cooldown of Power-Up Punch is reduced by one second each time your other move hits an enemy. If you hit an enemy with all of Bone Rush’s attacks, Power-Up Punch’s cooldown is reduced to two seconds, when Bone Rush is upgraded into Bone Rush+, you will be able to use Power-Up Punch three times. The combo goes like this:

Blast forward with a punch like a comet, dealing damage to enemies and shoving them. 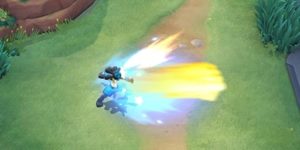 Meteor Mash deals good amount of damage but its defining feature is that it shoves enemies hit. You can use Meteor Mash to shove enemies away from wild pokemon so you can steal them.

You can also use Meteor Mash in combination with Quick Attack to shove wild pokemon away from the enemy team. This increases your chances of stealing wild pokemon but this will put you in harm’s way so decide accordingly.

Performs a combo attack with a bone, dealing multiple damaging blows to enemies and shoving them. The final attack sends the bone flying. If used again while the bone is traveling, the user rushes to the location of the bone, dealing damage to nearby enemies.

Using this move again will reset the cooldown for Extreme Speed or Power-Up Punch. 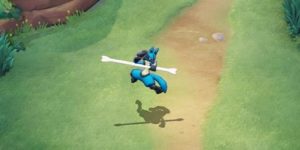 Bone Rush deals multiple attacks on enemies and it shoves them like Meteor Mash. After the attacks, it sends a bone flying that remains on the ground for a few seconds. You can use Bone Rush again to teleport to the bone and you will deal damage around the area you have teleported to.

When upgraded, Bone Rush resets the cooldown of your other move, opening up a lot of possible combos for Lucario.

Unleash a combo attack, dealing multiple blows to enemies and shoving them. 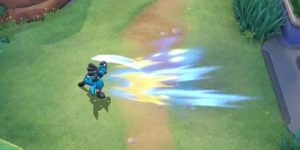 Close Combat unleashes a barrage of attacks. This deals a lot of damage but it requires the enemy to be stationary in order to deal its full damage. Close Combat is only ideal to acquire if you have an ally with reliable crowd control like Slowbro.

Close Combat deals multiple blows which makes it perfect for Power-Up Punch since it resets it completely if you hit all attacks of Close Combat.

Deals damage to enemies in the area of effect. Increases the damage dealt by the user’s next Power-Up Punch after using this move.

Aura Cannon deals burst damage to a long area. It can be used from a distance to deal damage to your enemies.

It charges for a considerable amount of time so you have to anticipate where your enemies are going to be to increases your chances of hitting them with Aura Cannon.

Your enemies will be notified that you cast Aura Cannon if they have vision of you so it is best to cast in from a distance or under tall grass.

It increases the damage of your next Power-Up Punch and it is possible to burst down an enemy pokemon with just these two moves.

Here are our Recommended builds on Lucario

The Extreme Rush build is perfect for a player looking for action. This build is a high-skill expression build that makes it possible for Lucario to execute crazy combos with unlimited Extreme Speed resets.

Score Shield grants a shield while scoring and if enemies are late to deplete your shield, they will fail to stop Lucario from scoring. This is great for Lucario since his passive also grants a shield and Score Shield stacks and extends the duration of any shield that its user currently has when scoring. It also synergizes with Attack Weight since Attack Weight rewards frequent scoring by its user.

Attack Weight grants bonus attack and each time its user scores, it adds more bonus attack. This is perfect for Lucario who has a high chance of scoring frequently in games because of his high mobility. Lucario also scales well into the late game and the stacking attack bonus only augments this fact. A simple trick you can do to stack this item fast is to score small amount frequently during the early game. You can also leave your Bone Rush mark on a safe location, score fast then teleport to the bone.

Float Stone increases the movement speed of its user especially out of combat. Lucario is already a high mobility Pokemon and any additional movement speed will make it even harder for enemies to catch up to him.

Eject Button is used in this build to compensate for the lack of mobility. Having the Eject Button opens up Bone Rush to be used only for offensive purposes because you’ll have the Eject Button for escaping. Of course, you can still use Eject button for chasing enemies if you want to.

Lucario is one of the most oppressive early game middle laner due to its combination of balanced mobility, damage, hindrance, and tankiness. Lucario might be the best jack-of-all-trades and it makes it overpowered because of that.

Start by acquiring Quick Attack then jump to Lillipup and quickly kill Ludicolo and Bouffalant. Afterward, head straight into the enemy’s side of the middle area and attempt to kill the enemy or at least steal their wild Pokemon. Trainers who can outplay an early game invade from Lucario are few and far in between.

If you successfully invaded the enemy middle laner. Begin to pressure the whole map by juggling between the Top lane, the enemy’s Middle area, and the Bottom lane. When there is nothing going on on the map or if the enemy begins to stay behind their own goal zones because of your pressure, clear our the wild Pokemon in their middle area.

Remember to visit the stronger lane when Vespiquen and the swarm of Combees when they spawn at the 8:50 minute mark. This will help your team push your lead even further.

Lucario’s passive Steadfast grants it a bonus shield and movement speed when its HP drops below a certain percentage. Once the shield pops up, give yourself 3 seconds to win the fight and if it passes, retreat so the enemy won’t be able to kill you.

What is the role of Lucario when taking objectives?

Lucario is one of the few Pokemon that can actually kill Drednaw on its own. Always rotate to Drednaw around 10 seconds before it spawns so you can have a headstart on killing it. If the enemy rotates faster than your teammate, use Lucario’s extra mobility to buy time for your team and in case your teammates has no map awareness or if they don’t know that Drednaw is a priority objective, stay back instead and prepare Lucario’s Unite move, Aura Cannon to attempt to snipe out the objective.

In the middle and late game, Lucario’s role with this build is to either distract enemies and damage them slowly but surely using the multiple reset combos and then try to assassinate low HP enemy Pokemon using unlimited mobility.

In all honestly, this is one of the highest skill cap builds and it will be possible to carry games 1v5 if the trainer practices Lucario enough.

The Punch Rush build deals more burst damage than the Extreme Rush build but it lacks the mobility. This is best used when your team has lots of reliable hindrance moves like if you are teammates with Slowbro or Wigglytuff.

Your role when using this build is to become a one-punch Pokemon destroyer using the charged-up Power-Up Punch.

One of the pros of this move is that even if it lacks mobility, Lucario is tankier with this build if the bonus defenses from charging up Power-Up Punch is utilized well.

When is the best time to use the Auro Cannon Unite move?

Aura Cannon is one of the best Unite moves for sniping down legendary Pokemon. The enemy team should always be wary when taking Drednaw, Rotom, or Zapdos because Aura Cannon has serious damage and range.

Aura Cannon can also be used to deal damage to enemies even before a fight begins.

Lucario is a rare Pokemon and it is dedicated and loyal. It heads deep into the mountain to train and strengthen itself.