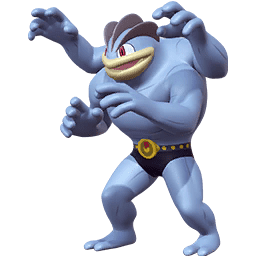 Best Machamp build guide for Season 1 in Pokemon Unite. With our Machamp guide, you will learn the best Held and Battle items to build, moveset, and how to use the moves of Machamp properly. Learn tips and tricks on how to play Machamp and counter your enemies.

Increases Attack when afflicted by a status condition.

Becomes a boosted attack with every third attack, dealing increased damage when it hits. This boosted attack also decreases the movement speed of enemies for a short time. Karate Chop is your main tool for knocking out wild pokemon in the early game. It deals decent damage and you can use it to harass enemies and steal wild pokemon when used in combination with Bulk Up.

Unleash a series of punches in the designated direction, dealing increased damage with the last punch. The user can move while using this move and becomes immune to hindrances.

Deals increased damage to enemies that are afflicted by a status condition. Close Combat deals a lot of burst damage and it is hard to evade once Machamp casts it up close because he is immune to hindrances while using this move.

Has the user deliver a double chop with forearms crossed while dashing forward. This increases the user’s critical-hit rate.

Increases Attack with each basic attack, up to a set max. Cross Chop is a dash that deals damage. It is a great gap closer because once you get close to your enemies, you will be able to deal lots of damage thanks to the critical hit-rate boost it gives after the move ends.

Once upgraded into Cross Chop+, it grants increasing Attack bonus for each consecutive basic attack. Bulk Up is a buff that makes Machamp immune to hindrances and it increases his movement speed, attack speed, and attack.

Bulk Up is best used before engaging into a fight so that your next damaging move also gets buffed.

Bulk Up makes Machamp’s next attack be a boosted attack.

You should also use Bulk Up to move more quickly across the map and to kill wild pokemon faster.

Jump to the designated location, dealing damage to enemies in the area of effect and leaving them unable to act when it hits. After using this move, the user becomes immune to hindrances, their movement speed and basic attack speed is increased. The next basic attack also becomes a boosted attack. Dynamic Punch is a dash that is loaded with effects. First, enemies hit are left unable to move when hit. Next, Machamp becomes immune to hindrances. Finally, Machamp gains bonus movement speed and attack speed and his next attack becomes a boosted attack.

Dynamic Punch is a great initiation tool since you will be free to deal more damage with your other move when this move hits as the enemy will be unable to move, fight back, or escape for a short while.

Increases movement speed and become immune to hindrances. When the next basic attack hits, the attack deals increased damage and slams the enemy onto the ground, leaving it unable to act. Once this move ends, the user’s critical-hit rate and basic attack speed are increased for a short time. Submission is a buff that increases the movement speed of Machamp and makes him immune to hindrances. After casting this move, Machamp’s next attack turns into a hindrance that throws the next enemy that Machamp attacks and slams them to the ground, leaving them stunned.

After successfully hitting an enemy with the boosted attack, Machamp gains bonus critical-hit rate and basic attack speed are increased.

Submission is great for initiating fights but it can also be used to escape since it grants increased movement speed.

The increased movement speed makes you ignore some of the slows from zones or enemy pokemon so it makes Machamp harder to escape or chase.

Increases the user’s movement speed, Attack, Defense, and Sp. Defense for a short time. If used again, unleash a combo attack, dealing damage to enemies in the area of effect and shoving them. The final blow deals an especially large amount of damage.

Activating Barrage Blow increases a lot of Machamp’s stats. If you want to commit to a fight, it is best to activate Barrage Blow before the start of the fight so you will be able to enjoy its effects to the fullest.

The second activation of Barrage Blow deals damage and shoves enemies in a fairly wide area and so it can interrupt and damage most of the enemy pokemon in front of you. It is great for dealing burst damage and for controlling an area when your team is trying to score on the enemy goal zones or when your team is trying to take Rotom, Drednaw, or Zapdos.

Because of the bonus stats this Unite move gives, it is best to unload your other moves first before casting the second cast of Barrage Blow.

Here are our Recommended builds on Machamp

Cross Submission is great for turning Machamp into a DPS machine. Submission and Cross Chop increase the critical-hit rate and attack speed of Machamp after their initial effects. It will be hard to out damage Machamp when he is using this build.

Muscle Band grants bonus damage to each of the basic attacks its user lands. With the bonus attack speed of this build, Machamp is going to land a lot of basic attacks and so the effect of Muscle Band will be used to the fullest.

Eject Button is a necessity with this build because Machamp’s weakness is he can be kited by pokemon that have mobility moves. Eject Button will allow Machamp to chase down enemies with dashes or he can also use it to escape if gets out-maneuvered by the enemy.

This build uses the same Held items as the build above.

X Attack is a great battle item for this build because you’ll be able to straight-up demolish the entire enemy team with a well-timed X Attack in combination with Machamp’s Unite move and Dynamic Punch + Close Combat combo.

Machamp can be played in any lane thanks to its innate tankiness, mobility, and strong basic attacks. Machamp can potentially deal absurd amounts of damage but it will take practice landing its moves because its moves are very telegraphed, meaning that its direction and patterns are easy to read and therefore, easy to predict and avoid.

In the early game, always use Bulk Up before casting Karate Chop to take advantage of the extra damage output.

Be careful when Bulk Up is on cooldown because Machamp relies on it to survive fights and ganks.

What is the role of Machamp when taking objectives?

Machamp is, from its role as an all-rounder, a pretty balanced Pokemon. It has good amounts of health and damage. But you have to be patient and know when to land its moves because Machamp’s moves are easily avoidable.

At the start of an objective fight, you can put yourself between the objective and the enemy team. This way, you will be an ever-present threat that can deal damage to them whenever they overstep into your range. You can absorb some poke damage but do not overcommit to chasing enemies because you won’t be able to survive if all of the enemies gang up on you. The only time you should go on the aggressive when enemies are more than you is when you are planning to use Machamp’s Unite move to take all of them down.

The Cross Submission build turns Machamp into a damage-per-second machine. Cross Chop is a dash that also increases Machamp’s critical-hit rate after casting and Submission turns Machamp’s next basic attack into a hindrance along with increasing its movement speed, critical-hit rate, basic attack speed, on top of making Machamp immune to hindrances.

The Dynamic Combat build is great for dealing lots of damage in team fights. Both Dynamic Punch and Close Combat deals area damage but they are also both very telegraphed abilities so they can be hard to use. This build is easier to use when you have teammates with area hindrance moves like Snorlax or Mr. Mime.

You have to be patient when using this build because if you miss both moves, the damage output of Machamp from its basic attacks won’t be as strong when compared to when using the other build.

When is the best time to use the Barrage Blow Unite move?

Barrage Blow is best used a little after a fight breaks out. You should never start a fight with Barrage Blow because enemies would automatically run at the first sight of an overly buffed-up Machamp.

It is best if you can sneak and flank enemies from behind so they will have no choice but to either run up to your teammates or face the full combo of Barrage Blow.

Machamp is said to know every martial arts style. It punches extremely quickly but maybe unfortunately, its arms react much faster than Machamp can think.