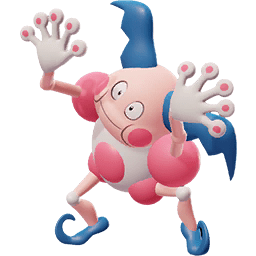 Best Mr. Mime build guide for Season 1 in Pokemon Unite. With our Mr. Mime guide, you will learn the best Held and Battle items to build, moveset, and how to use the moves of Mr. Mime properly. Learn tips and tricks on how to play Mr. Mime and counter your enemies.

Reduced damage received for a short time after using a move.

Becomes a boosted attack with every third attack, dealing increased damage and throwing enemies when it hits.

Slap its hands together, shoving enemies in front of it. Fake Out is your damaging move in the early game. It is great for interrupting enemy pokemon as well. Use it after your boosted attack so you can consecutively interrupt enemies multiple times in a short span of time. Confusion is your ranged hindrance move. You can combine it with your other move so the enemy will receive additional effects.

If you chose Barrier, you have to place the barrier behind your target enemy. Confusion shoves enemies and they will receive more damage and they will be stunned if they hit the Barrier as they are shoved.

If you chose Guard Swap, if you hit an enemy that is Guard Swapped, the enemy will not be shoved but they will receive more damage and they will become automatically stunned.

Centers one telekinetic blast each on the user, any guard-swapped enemies, and any Light Screen or Barrier walls created by the user, damaging all enemies caught in the blasts and lowering their Sp. Defense for a short time. If an enemy is hit by multiple overlapping blasts, that enemy is also left unable to act for a short time.

Also decreases the movement speed of enemies for a short time.

Psychic is damaging debuff move. Psychic activates around the user and on any Guard Swapped target, and on Light Screen or Barrier walls you have created.

When Psychic hits an enemy, they are damaged, their special defense is lowered, and if they are hit by multiple Psychic blasts, they are stunned for a short duration.

Create a wall of light in the designated area that prevents enemies from passing. Light Screen creates a one-way wall. Enemies cannot move through the walls but teammates can.

Light Screen is great for controlling areas when you do not want enemies to escape or enter an area.

A very strong use of Mr. Mime’s walls, Light Screen or Barrier is that it can prevent dashes, even displacement-based Unite move like Talonflame’s Flame Sweep.

Create a translucent wall in the designated location that prevents enemies from passing. A maximum of two uses can be kept in reserve for this move.

Increases the max number of uses that can be kept in reserve. Barrier is the upgraded version of Light Screen. It creates thicker walls which makes it harder for enemies to go around it. It can be used multiple times when you have charges of it to have more control of an area.

You have to postpone using Barrier for longer periods of time if you want to have more charges of it ready for big fights.

Also continually restores the HP of the user and the ally while this move is in effect. Guard Swap exchanges Mr. Mime’s defense and special defense to the target pokemon. Both enemies and allies can be targeted by Guard Swap.

When targeted on enemies, aside from swapping defense and special defense, enemies are dealt damage over time and their movement speed is slowed.

Target enemies that are:

When targeted on allies, aside from swapping defense and special defense, the target ally and Mr. Mime gains bonus movement speed.

Target allies that are:

Jump to the designated location and start a pantomime performance, dealing damage over time to enemies in the area of effect and leaving them unable to act for a short time.

Showtime is a great area hindrance Unite move. It deals damage over time and for each instance of damage, affected enemies are stunned.

This Unite move is perfect for controlling the battlefield and giving your team the upper hand when trying to take Rotom, Drednaw, or Zapdos or when clutching a score or goal defense with your team.

Here are our Recommended builds on Mr. Mime

Confusion Swap is great for picking off stray enemies thanks to the stun combo with Guard Swap and Confusion. When trying to stun enemies, be mindful of your position because Guard Swap applies to the first pokemon hit, whether ally or enemy.

Confusion Swap is also great for defensive supporting as Guard Swap can give your squishier allies, the Attackers and Speedsters your defense and special defense. As you do this, you can also shove enemies they are trying to fight with Confusion.

Buddy Barrier grants a shield to you and to the lowest HP allied pokemon near you when you cast your Unite move. This grants another supporting aspect to your kit, increasing the impact of your Unite move.

Energy Amplifier increases the rate you charge your Unite move. Your Unite move is a high-impact area move that can turn the tides of battle so having the chance to use it as often as possible is important for a Mr. Mime user. It also decreases the cooldown of your moves and moves are the lifeline of a support pokemon.

Slow Smoke disorients and slows enemies around the area it is cast. Mr. Mime is an area control specialist and this just augments his role on the team.

The Psychic Barrier build uses the same Held and Battle items as the Confusion Swap build.

Mr. Mime is a hindrance specialist support. It excels in controlling the battlefield through creating one-way walls and by stunning, shoving, debuffing enemies, or buffing allies.

Unlike traditional supports, Mr. Mime excels in combat and mind games. It helps its allies through manipulating enemies, making him a hard Pokemon to fight against, in the hands of the right trainer. Because of Mr. Mime’s complicated kit, it can be quite challenging for beginners to use it.

Mr. Mime is quite tanky even if it is listed as a support and not a defender because of its passive, Filter that decreases the damage it receives after casting a move. Time using Mr. Mime’s abilities when it is going to be hit by the enemy’s moves to last longer in battle.

Mr. Mime’s boosted attack shoves enemies. Use it in between its moves that also apply hindrance to enemies to annoy enemies with multiple hindrances.

Mr. Mime can support both skill-shot heavy Pokemon like Venusaur or Gardevoir thanks to its walls and hindrances and it can also support brawler type Pokemon like Machamp or Lucario thanks to its Guard Swap move that transfers its defenses to a target ally while healing them at the same time.

What is the role of Mr. Mime when taking objectives?

Mr. Mime’s role when taking Drednaw, Rotom, or Zapdos is to delay enemies from reaching the objectives and when they do, prevent them from gaining the upper hand through its area controls.

Do not work alone. Always be near a Pokemon who can deal damage since it is the only thing that Mr. Mime lacks. Mr. Mime’s strong control moves means nothing if there is not an ally nearby to utilize it.

The Confusion Swap build is best used when you have a hard-carrying melee ally like Lucario, Machamp, Garchomp, Zeraora, or Absol. You can make them more challenging to take down using Guard Swap and support them further using Confusion.

Always stick to your carrying teammate so you can use your moves to help them. It does not necessarily mean that you should use your Guard Swap on melee allies, using it on ranged attackers is equally valid if they are dueling an enemy Pokemon. Guard Swap can also be used on enemies but it is better to use it against enemy defenders so you will lower their defenses.

The Psychic Barrier build is the area control build of Mr. Mime. It is a high-skill build that demands practice and good game sense from its trainer. You have to predict where it is best to put walls are and the best thing to quickly learn where to put walls is to play this build over and over again.

One tip to maximize Barrier is to place it near other obstacles so the enemy would only have one option on where to go.

Remember that Psychic explodes on both Mr. Mime and on all existing Barriers and when it overlaps, enemies get stunned. Use Mr. Mime itself or place multiple Barriers to consistently proc the stun.

When is the best time to use the Showtime Unite move?

The best time to use the Unite move of Mr. Mime is after the battle has just started. The continuous hindrance on enemies will make it easier for your allies to land their moves, greatly increasing the chances that your team will be able to snatch a quick and convincing victory on a team fight. Of course, you should make sure that your allies are close enough for them to follow up on your Unite move.

Mr. Mime is a naturally born showman but if an audience interrupts them or if it notices that its audience is unimpressed, the unlucky spectator might just get slapped.