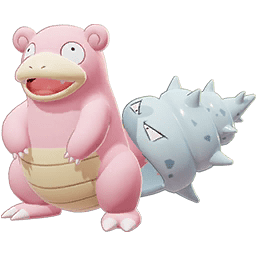 Best Slowbro build guide for Season 1 in Pokemon Unite. With our Slowbro guide, you will learn the best Held and Battle items to build, moveset, and how to use the moves of Slowbro properly. Learn tips and tricks on how to play Slowbro and counter your enemies.

When Slowbro receives damage, the HP loss is gradual. When damaging an opponent with a move, restore some of the remaining gradual HP loss and decrease the target’s Sp. Defense.

Becomes a boosted attack with every third attack. When this boosted attack hits, deal damage to nearby opposing Pokémon and decrease their movement speed.

Slowbro channels a fierce stream of water which deals damage and lowers movement speed. Increase the area of effect and damage the longer this move is channeled. Water Gun is your damaging move in the early game. It can be channeled by holding the move button and it deals its maximum damage once the bar is over half.

Water Gun has a larger area of effect and stronger damage the more it is channeled. It is effective at stealing wild pokemon from enemies.

Water Gun cancels when you channelled it too much.

Deal damage to opposing Pokémon and create steam when it hits. Opposing Pokémon inside the steam’s area are left burned and have their movement speed decreased. Scald is the upgrade of Water Gun. It deals more damage and it slows down and burns enemies inside the steam it creates.

Scald is not used as often as its alternative, Surf because the latter grants more utility to Slowbro.

Charge forward on a wave, dealing damage in an area and knock opponents back. This is followed by two more waves that deal damage and decrease enemy movement speed.

The second and third waves become larger and also knock enemies back like the first wave. Surf creates three waves that damage enemies. The first wave knocks back enemies and the second and third waves slow enemies. Once upgraded into Surf+, all waves knock enemies, making it a potent area control move.

Surf can be used to disrupt enemies who are trying to score and it can also be used offensively to keep enemies from escaping.

Lay down and take a rest, continuously regaining health. Damage taken will reduce the recovery effect. Slack Off is great for recovering HP when you are being harassed by enemy pokemon. Use it under your own goal zone to recover HP faster.

You do not have to finish the animation of Slack Off but it will still heal Slowbro.

Nullify some damage before it takes effect. For a short time after using this move, become immune to hindrances and gain increased defense. Also increase the damage dealt by the next use of Scald or Surf. Amnesia helps Slowbro tank more damage because it increases his defenses and makes him immune to hindrances for a short duration.

Amnesia also increases the damage of the next cast of Surf or Scald so do not forget to cast Amnesia first before using your other move. Telekinesis is a single target hindrance move. It prevents your target from moving and you can cast this move again to pull your target close to you.

You should Telekinesis again to pull your target before its duration ends to follow it up with Surf to disable your target for a longer period of time.

Telekinesis has a slow projectile speed so it can be avoided by enemies.

The enemy team will try to help their teammates by controlling you because Telekinesis can be cancelled using their own hindrances. You can prevent this by using Full Heal.

Stare at an enemy and attack continually, dealing damage and rooting them. Grants a shield and makes the user immune to hindrances while using this move.

Slowbeam is a stronger version of Telekinesis. Unlike Telekinesis, Slowbeam cannot be cancelled by the enemy team because Slowbro is immune to hindrances while casting this Unite move.

Furthermore, Slowbeam also damages the target while it is active. It also grants a shield to Slowbro while executing the Unite move.

Slowbeam is usually used to shut down the enemy’s strongest pokemon. But it can also be used to stall enemies and buy time for you before your team arrives thanks to its shield.

Here are our Recommended builds on Slowbro

Telekinesis Surf build offers a lot of hindrances for Slowbro and his team. Once Surf is upgraded into Surf+, it does three knockbacks. Telekinesis is a long-duration single target hindrance capable of shutting down even the strongest pokemon of the enemy team, provided that they do not have Full Heal.

Energy Amplifier increases the rate that Slowbeam is charged. Since this build relies on using hindrances, the more you can use Slowbeam, the more effective at disabling the enemy you become.

Shell Bell grants cooldown reduction and it also heals you for successfully landing moves. Slowbro is vulnerable when using this build and the extra healing will help you survive fights more often.

Exp Share helps you and your lane partner gain more experience points. You are playing as a support when using this build so any way your teammates gain an edge will also help you. If your lane partner gets ahead in levels,  they will deal more damage and make your hindrances more effective.

Eject Button can be used to surprise your enemies with your hindrances.

The Surf Amnesia build makes Slowbro tankier and deals more damage thanks to Amnesia. Amnesia increases Slowbro’s defenses and it buffs the damage of Surf.

Rocky Helmet punishes enemies who damage Slowbro by dealing damage to enemies around him once he absorbs enough damage based on his maximum HP.

Focus Band grants bonus Defense and Special Defense and it heals its user once its HP drops low enough. This item synergizes with Slowbro’s Oblivious passive since it will heal the damage that it receives before it applies and knocks out Slowbro.

Eject Button will help Slowbro escape dangerous situations when he is outnumbered because this build requires him to be up close and personal with enemies.

Slowbro is played as a tank in the Top lane or Bottom lane together with an attacker or all-rounder. He excels in absorbing damage thanks to its passive, Oblivious that delays the damage it receives, and if Slowbro hits an enemy with a move while it has delayed damage, some of the delayed damage is healed back and it also applies a debuff to an enemy, decreasing their Sp. Def.

Take advantage of the Oblivious passive by using yourself as a meat shield and do not forget to use Slack Off or Amnesia to be more effective at absorbing damage. It can be annoying for your enemies when they see you use Slack Off right in front of them. You’d want to annoy them as much as possible because you are a tank and you’d want to absorb as much damage and moves as possible.

Even if it is a tank, Slowbro has a strong ranged move that can be used to steal wild Pokemon from enemies through its Water Gun move. Be sure to hold it to channel it up until over half its charging bar so you will do full damage with it.

If you have an enemy attacker of speedster that is snowballing and killing your teammates and your team is struggling, it is best to acquire the Telekinesis move because it is one of the best single target hindrance moves. Of course, Slowbro’s Unite move, Slowbeam is a better Telekineses but if you acquire Telekinesis, you will be able to shut down the enemy’s carry over and over again throughout the course of the match.

What is the role of Slowbro when taking objectives?

Slowbro can absorb so much damage, especially when using Amnesia. Use Amnesia to increase Slowbro’s defenses then disrupt the enemy team as much as you can using Surf.

If you are using Telekinesis instead, keep an eye on enemies that can potentially steal the objective and use the move on them while the objective is low on HP to deny them the chance of stealing it.

The Surf Amnesia build is Slowbro’s traditional tank build. Remember to use Amnesia to brace when you are going to be hit by enemy moves and always cast Amnesia first before using Surf for the bonus damage.

When is the best time to use the Slowbeam Unite move?

Slowbeam is the strongest single target hindrance move in all of Pokemon Unite but it can only be utilized to its fullest if you have an ally together with you to deal damage and finish off the enemy.

Slowbeam should only be used on the enemy’s heavy hitters, especially ones who are hard to kill like Greninja, Cinderace, Zeraora, and Lucario.

Slowbro is actually two Pokemon. It is a combination of a Slowpoke and a Shellder. The Shellder is continuously poisoning Slowbro,  making it unable to feel pain. Slowbro is a peaceful Pokemon but it can be inspired by Shellder and make it unleash powerful psychic attacks by biting down its tail.