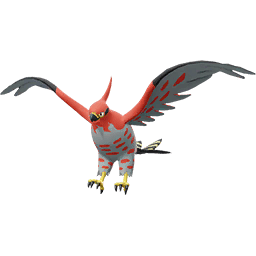 Best Talonflame build guide for Season 1 in Pokemon Unite. With our Talonflame guide, you will learn the best Held and Battle items to build, moveset, and how to use the moves of Talonflame properly. Learn tips and tricks on how to play Talonflame and counter your enemies.

While at high HP, movement speed is increased.

Becomes a boosted attack every third attack, creating a fiery whirlwind that deals damage to enemies in the area of effect. This boosted attack remains readied even after leaving combat for a prolonged period of time.

Fly toward an enemy and attack 3 times. 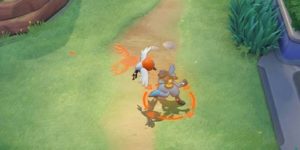 Peck is a targeted dash move. It can be used to dash to enemies.

Use it after a boosted attack for an efficient pattern of knocking out wild pokemon.

Fly in the designated direction while cloaked in flame, attacking enemies in the path. This also increases the movement speed for a short time. 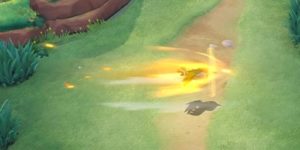 Flame Charge is a damaging dash move that is great for chasing or escaping as it also grants bonus movement speed after the dash.

Once upgraded into Flame Charge+, it buffs Talonflame’s basic attacks and moves to ignore defense so use it as a fight opener once upgraded.

You can use Flame Charge to escape fights by manually targeting it away from enemies.

Fly at the designated enemy, dealing damage. Also makes the next basic attack a boosted attack. 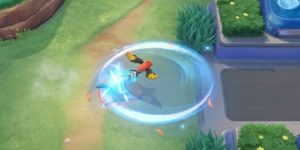 Talonflame’s boosted attack can be readied beforehand and it does not reset so before going into a fight, attack wild pokemon twice or until you see the yellow bar underneath your HP bar. If you cannot see the white and yellow bars underneath your pokemon’s HP, you should turn it on under Settings > Controls >  Boosted Attack Gauge.

By readying Talonflame’s boosted attack before going into a fight, you will be able to do two boosted attacks in quick succession.

Another good combo with Talonflame is by using Brave Bird as it makes the next boosted attack reset the user’s other move. The Combo goes like this:

Do not use the first boosted attack if you have one before casting your first Aerial Ace because that will waste the possible Aerial Ace reset.

Fly toward the designated area and attack multiple times. Escape in a direction of your choice after using this move. 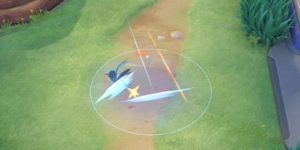 Acrobatics is a damaging dash move. You can choose where your attacks will strike.

You are not untargetable while you use Acrobatics so think twice before using it to enter the middle of a fight.

You can use Acrobatics to escape by manually targeting it in a direction away from enemies.

You will exit the animation of Acrobatics in the direction your left analog stick is pressed.

Fly up into the sky. Using this move again will cause you to dive to the designated area and attack, dealing damage to enemies in the area of effect. Your next basic attack becomes a boosted attack. 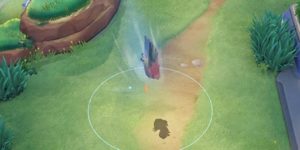 Fly is best used to sneak up behind enemies. Although they will still be able to see your shadows as you approach, you will be above bypassing any of their efforts to stop you.

You can use Fly once again to forcefully drop into the area beneath you, dealing damage to enemies on that area and gaining a boosted attack. Once upgraded, you Fly+ also throws damaged enemies.

Fly has a short delay as you fly up, during this short delay, you will still be damaged but you cannot be interrupted.

Dive to the designated location while cloaked in flame, dealing damage to enemies in the area of effect. Also deals recoil damage to the user when it hits. Performing a boosted attack within a set amount of time after this move hits will reset the cooldown of Flame Charge or Aerial Ace. 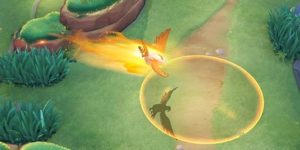 Brave Bird is the second longest dash move of Talonflame, second only to his Unite move Flame sweep.

Brave Bird deals burst damage to an area but it also deals some damage to Talonflame himself.

You should use your other move before attacking after casting Brave Bird as the next boosted attack will be able to reset Talonflame’s other move. This enables Talonflame to do a burst damage combo.

You are unstoppable while casting Brave Bird. You will still receive damage but hindrances won’t be able to interrupt the casting of this move.

Perform an aerial somersault before charging forward, dealing damage to enemies in this move’s path and shoving them.

Flame Sweep is a long-range damaging dash move. Its damage is good but it is only but a small portion of this Unite move’s main effect.

Its main effect is that it can shove enemy pokemon a long distance. You can use Talonflame’s mobility to sneak behind enemy pokemon and shove them to your team. All enemy pokemon caught are shoved into the full range of Flame Sweep, bundling them together and making them vulnerable to area attacks.

Another great use of Flame Sweep is to shove enemies away from allies, especially when your team is taking Drednaw, Rotom, or Zapdos.

Here are our Recommended builds on Talonflame

The Ace Bird build is best for assassinating enemy pokemon with about half HP. It is not as mobile as the second build but it deals more damage. You can use the second cast of Aerial Ace to disengage fights.

Razor Claw adds bonus damage to your next attack after using a move. The Ace Bird build relies on bursting down your targets and the bonus damage from this Held item will exactly help with accomplishing just that.

Muscle Band grants bonus damage on each of your attacks based on your target’s current HP. Talonflame is a Speedster with high base attack speed so this item is great on him. Wild pokemon that grants a buff also has high HP so Muscle Band is necessary for playing pokemon in the mid lane.

X Attack increases its user’s attack damage for a short duration. When used together with Talonflame’s combo, he’ll do devastating amounts of damage.

The Fly Charge build grants more mobility and survivability to Talonflame but it deals less damage. This is perfect for users who want more mind games and are more aware of the map. No low HP pokemon is safe with this build.

Another great thing with this build is that because of the high mobility, it is easy to set up game-breaking plays with Talonflame’s Unite move, Flame Sweep.

It is harder to burst down a pokemon using this build so instead of X Attack, Eject Button is recommended for even more mobility.

Talonflame might just be the most mobile speedster in the game. It is the only Pokemon that can move through multiple obstacles through an upgraded move. Yes, other Pokemon can also move through objectives through dashes and teleports but it can only be done through one obstacle. Other Pokemon can also fly over obstacles but only through their Unite moves. It also has a constant movement speed boost as long as its HP is at a high level.

Plus, Talonflame has a unique boosted attack in the sense that it does not reset even after being away from battle. Almost all, if not all, Pokemon has their boosted attack counter reset to zero after leaving the battle.

In the beginning of the game, select Acrobatics as your first move so you can immediately jump to Lillipup. After that, knock out Ludicolo and Bouffalant as fast as possible then kill one Corpish and then quickly visit the adjacent lane.

Do not stay on one lane for more than 10 seconds. If you cannot burst an enemy down, quickly head back to the center of the map, knock out wild Pokemon on the way, then head to the other side on the map. There are no other Pokemon that can do this as fast as Talonflame can.

Remember to choose one lane to help once the Vespiquens and Combees spawn at 8:50. A lane will have a bigger chance to succeed if you managed to secure those wild Pokemon.

What is the role of Talonflame when taking objectives?

Talonflame’s role while taking Drednaw, Rotom, or Zapdos is to attack the flank of enemy attackers at the backline. Talonflame can easily do this given its high mobility. Wait for an opportunity to attack when the enemy team has unloaded their moves and preferably, attack those with less than 50% HP.

When objective fights are happening, teams are usually grouped up so you can also use Talonflame’s Flame Sweep Unite move to drag them to your team to burst them to death or you can drag them away from the objective to deny them the chance to secure it.

The Ace Bird build is a burst damage build that can easily shut down enemy attackers and other speedsters. You simply have to wait for enemies to be damaged by your allies and then dash in, burst them and knock them out, dash out then repeat.

Hide under grass or attack together with your teammates while waiting for an opportunity to assassinate low HP enemies when the fight is about to end.

The Fly Charge build has what makes Talonflame infamously mobile, the Fly move. Fly allows Talonflame to become invincible and able to ignore obstacles. Use this move to set up ganks and assassination. Another important use of Fly is that it makes it easy for Talonflame to set up an initiation using its Unite move.

When is the best time to use the Flame Sweep Unite move?

Flame Sweep is best used to drag an enemy or two or the whole team into your team. You can easily do this by using either Brave Bird or Fly to sneak up to the enemy team’s backside and cast Talonflame’s Unite move towards your team.

You can also use Flame Sweep to drag them away from objectives or if you are feeling confident, you can use it to set up a team ace.

Talonflame can reach speeds up to 500 km/h. In comparison, a real-life Peregrine Falcon’s maximum recorded top speed is 389 km/h.