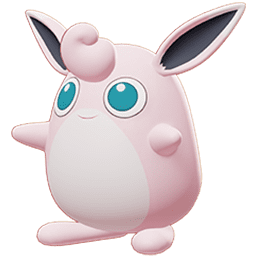 Best Wigglytuff build guide for Season 1 in Pokemon Unite. With our Wigglytuff guide, you will learn the best Held and Battle items to build, moveset, and how to use the moves of Wigglytuff properly. Learn tips and tricks on how to play Wigglytuff and counter your enemies.

When hit by an enemies attack at close range, make that enemy infatuated for a short time. Infatuated enemies become enthralled and approach Wigglytuff against their will. The effects of this ability have a cooldown and cannot trigger on the same enemy in quick succession.

Becomes a boosted attack with every third attack, dealing damage to enemies and spinning them around when it hits.

Perform a combo attack in front, dealing damage to enemies and decreasing their movement speed for a short time when the attack hits. 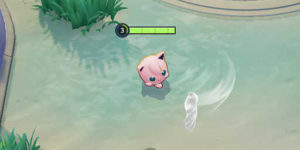 Pound is your early game damaging ability. It deals a good amount of damage and it slows enemies. Try to hit enemies with your boosted basic attack or with Defense Curl while they are slowed.

You can deal considerable damage if you can successfully pull of a Pound > Defense Curl > Pound combo. This can be done to enemies near walls or obstacles.

Perform a combo attack in front, dealing damage to enemies and decreasing their movement speed for a short time when the attack hits. 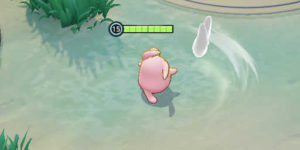 Double Slap is simply an upgraded version of Pound that deals more damage.

Just like with Pound, try to combo this move with your boosted attack and with Defense Curl or Rollout to deal apply hindrances to enemies and deal considerable amounts of damage.

Emit a powerful flash in the designated direction, dealing damage to enemies in the area of effect twice.

Also decreases the movement speed of enemies for a short time when the first hit of this move deals damage to them. 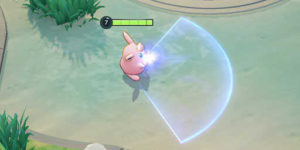 It is best combined with Sing because it deals two waves of damage and the second one is dealt after a delay. Sing will make sure that both waves of damage hits, enabling Wigglytuff to deal considerable amounts of damage.

Perform a quick roll, granting the user a shield and throwing any enemies hit by the roll. Hitting an obstacle while rolling will change the direction the user is moving and reset the cooldown of Pound, Double Slap, or Dazzling Gleam. 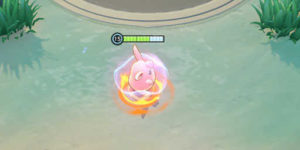 Pound makes Wigglytuff roll a short distance and gives her a shield. It is great for interrupting enemies by throwing them but it is best when cast at enemies near walls or obstacles. This is because you will be able to throw enemies twice and the cooldown of Wigglytuff’s other move will reset.

Pound combos well with the Score Shield Held item. You simply have to roll into the enemy’s goal zone and the shield will be buffed and extended while you attempt to score. Your scoring attempt won’t get interrupted even if you get damaged as long as you have the shield.

Perform a quick roll, granting the user a shield. Also deals damage to enemies hit by the roll and throws them. Hitting an obstacle while rolling will change the direction the user is moving and reset the cooldown of Pound, Double Slap, or Dazzling Gleam.

Increases the length of time enemies are thrown. 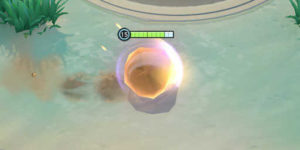 Rollout is the upgraded version of Defense Curl. It makes Wigglytuff roll a longer distance, allowing her the opportunity to bounce a lot of times.

Rollout is best used on tight spots where Wigglytuff can bounce a lot and so make poor enemies get thrown a lot in the process.

Rollout is also great for allowing allied pokemon to score on the enemy goal zones by making Wigglytuff roll vertically across the goal zones so that enemies that try to interrupt your teammates will become thrown.

After rolling, Wigglytuff gains a shield and you should use that shield to score in the enemy goal zones yourself.

Has the user sing, decreasing the movement speed of nearby enemies for a short time. Enemies that stay in the move’s area of effect for a while are put to sleep for a short time, which also decreases their Defense and Sp. Defense. 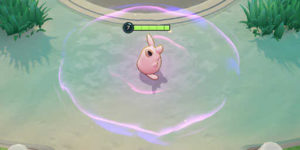 Sing is a great hindrance move that also applies a defense-reducing debuff. Wigglytuff starts to sing when this move is activated and enemies are slowed. If enemies fail to leave the area near Wigglytuff, they are put to sleep and their defense and special defense are reduced.

Begin performing a recital, granting the user and nearby allies a shield as well as removing all status conditions from the affected allies and make them immune to hindrances for a short time.

Dazzling Gleam is a wide area support buff. It grants a shield to Wigglytuff and allies near her and makes them immune to hindrances.

This Unite move is perfect for taking Zapdos or when trying to force a score on the enemy team when you and your team are all together.

The increased shield amount thanks to Buddy Barrier will make it almost impossible for enemies to interrupt your scoring attempt while your Unite move is active.

Here are our Recommended builds on Wigglytuff

The Dazzling Song build is a pure support build that can slow enemies, put them to sleep, and reduce their defense and special defense. It also deals some damage thanks to Dazzling Gleam. This build is the safer build because putting enemies to sleep is a simple task.

Buddy Barrier makes it safer for Wigglytuff to walk near enemies and put them to sleep because of its high HP bonus. When the user activates their unite move it grants a bonus shield to Wigglytuff and the lowest HP nearby ally is great for scoring and saving allies or its user itself.

Score Shield is a great item for Wigglytuff because her moves grant a shield and that shield is extended when she attempts to score, making it hard for her enemies to interrupt her scoring attempt.

Exp Share is a staple item for supports. It makes your lane partner gain more experience for each wild pokemon they knock out and when you have the lowest experience among your allies, it also gives bonus passive experience to you. This Held item will make sure that you and your lane partner will always come out on top in terms of experience points.

Slow Smoke gives you another way to control the battle area. It can be used after putting enemies to sleep so that they will be disoriented with another form of hindrance.

The Rollout Slap build can potentially deal a lot of damage and apply lots of hindrances to enemies. The keyword here potentially. The Rollout move is highly dependent on the presence of walls and obstacles on the user’s ability to use it to its maximum potential.

Most of the time, you won’t be able to chain Rollout throws because it can only be done in a limited number of areas on the map.

Although, the shield Rollout gives is useful for scoring when combined with Score Shield and its cooldown reset mechanic allows Wigglytuff capable of more damage compared to the other build.

Scope Lens is substituted for Exp Share in this build so that if your lane partner is unreliable, you’d be able to take control of the game. All of Wigglytuff’s moves can crit and this Held item grants bonus critical-hit rate and critical-hit damage.

X Speed is used on this build because it synergizes with Rollout. Activate X  Speed before or during Rollout to increase the speed of Wigglytuff making it easier to make multiple bounces on the move.

Despite its looks, Wigglytuff is an offense-oriented support. It can consistently dish out damage and hindrances on enemies.

Its passive, Cute Charm applies a hindrance on enemies who attack Wigglytuff at close range. Those who are affected are forced to approach Wigglytuff against their will. This passive has an internal cooldown for each enemy Pokemon which means that multiple enemies can be charmed consecutively but a single enemy Pokemon can only be charmed once in a while.

Fight near obstacles because Wigglytuff’s move, Defensive Curl can reset the cooldown of Pound if it bounces against an obstacle. Plus, it can also potentially throw an enemy twice because of the bounce.

Do not hesitate to steal knockouts from your allied Pokemon if you think they are not capable of carrying. Why? Because Wigglytuff is the only support that is capable of fighting 1v1 against other Pokemon types. Its Double Slap move can crit so using the Scope Lens Held item is a viable pick for a solo queue Wigglytuff player who is looking to carry the game by itself.

What is the role of Wigglytuff when taking objectives?

Wigglytuff, despite being a support, should be played like a defender or an all-rounder. Wigglytuff should be in between the objective and enemies, looking for opportunities to damage enemies and apply hindrance to them so they would be discouraged from going all-in on contesting the objective and if they do, they will already be at a disadvantage.

The Dazzling Song build is the build that is more support-oriented and is dependent on your teammate’s follow-up to be effective. Dazzling Gleam deals two instances of damage so you’d need to use it while Sing is active to make sure that both instances hit the enemy. Sing is an easy-to-land hindrance, you just have to follow enemies while it is active to put them to sleep. Make sure that you have allies near you while it is active to fully utilize the sleep and reduced defenses effect.

This build slaps, literally. When combined with the Scope Lens Held item, you will be able to take the fate of the game into your own hands.

The important thing to remember when using this build is that you have to use Wigglytuff’s abilities in the right order. Always use the Double Slap in combination with the boosted attack then use Rollout to at least reset the cooldown of Double Slap. Of course, it is a big bonus if you can throw multiple enemies more than once but it is highly dependent on the presence of obstacles to do so.

When is the best time to use the Starlight Recital Unite move?

Starlight Recital is best used reactively when enemies use their strong moves, especially Unite moves that can cause a lot of damage and hindrances like Mr. Mime’s Showtime or Gardevoir’s Fairy Singularity.

It is also a great way to force a score during the clutch time, under 2:00 minutes remaining, for you and your allies because enemies won’t be able to interrupt your team while all of you have shields.

Wigglytuff can inflate itself to up to 20 times its normal size. It also has fur that is so soft that it becomes impossible to stop rubbing it once you start.