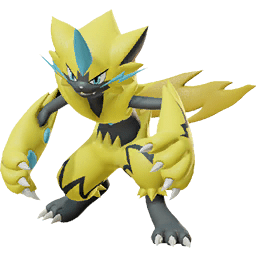 Best Zeraora build guide for Season 1 in Pokemon Unite. With our Zeraora guide, you will learn the best Held and Battle items to build, moveset, and how to use the moves of Zeraora properly. Learn tips and tricks on how to play Zeraora and counter your enemies.

Gain an electric charge when receiving damage, converting a portion of that damage into additional Attack.

Becomes a boosted attack with every third attack, dealing increased damage and paralyzing the enemy while restoring some of Zeraora's HP. Agility is a short dash and a buff. It is great for getting from one place to another and for quickly clearing wild pokemon thanks to the bonus attack speed.

You can also use Agility to get close to enemy pokemon fast when trying to gank the top or bottom lane.

Perform a high-speed dash, dealing damage to enemies hit and increase basic attack speed for a short time. Using this move again within a set period of time will allow the user to immediately dash back to the original position. Volt Switch allows Zeraora to dash a long distance and damage enemies hit along the way.

After the initial dash, Zeraora gains bonus attack speed and he can reactivate Volt Switch to teleport back to his original position.

Volt Switch is great for assassinating enemies even when they have allies near them because Zeraora can simply re-cast this move to get to safety.

You can confuse enemies with this move when trying to get away from your enemies because you have the option to either use it again if they follow you or if they think you will use this ability again and they stayed back waiting for you, you can just simply walk away.

Volt Switch can be used to pull paralyzed enemies when combined with Discharge. You have to time the second cast of Volt Switch at the end of Discharge to pull them to Zeraora’s original position.

Remember, only those who are paralyzed will be pulled by Discharge. You can paralyze enemies through Zeraora’s boosted attack, its Unite move, or through the effects of other Pokemon like Pikachu.

Leap at an enemy dealing damage to them. If using your basic attack before reaching the targeted enemy, instead leap at the closest enemy and deal damage to it. This move can be used 3 times before going on cooldown.

Also restore HP if performing a basic attack before reaching the targeted enemy. Spark is a dash that you can use three times. While dashing, you can use your basic attack to quickly jump to an enemy.

Once you are proficient enough with controlling Spark, you will be able to use it to dodge enemy moves with ease.

You can increase your degree of control to this move by enabling advanced controls and lock-on icon.

You can take it one step further by using the lock-on icon that will allow you to choose the enemy pokemon you want to target.

Remember that you have to press the basic attack button mid-dash.

You can also use this move to quickly get away from pressing the move multiple times towards your target location.

Pounce at an enemy and attack with sharp claws. This move’s final attack throws enemies. Slash is your damaging move in the early game. It is a targeted move that does quick slash and the final slash throws the enemy.

The final slash interrupts your target’s action so it can cancel the moves they make.

Release an electrical discharge, dealing damage to nearby enemies and grant the user a shield when it hits. If this move hits enemies that are paralyzed, it pulls them in toward the user once the move ends, dealing damage to them once again and leaving them unable to act.

Decreases movement speed of enemies for a short time when this move hits. Discharge deals a lot of area of effect damage over time around Zeraora.

Remember to use your basic attacks while this move is active because your boosted attack paralyzes enemies and paralyzed enemies are dealt bonus damage, pulled towards Zeraora, and are stunned for a short duration. Enemies can also be paralyzed through Zeraora’s Unite move, Plasma Gale, and through the paralyzing effects of other Pokemon such as Pikachu.

Use Spark to deal as much damage to as many pokemon as possible with Discharge.

You can combine Discharge with Volt Switch to pull enemies over long distances. To do this, you have to time the second cast of Volt Switch with the ending of Discharge, when it pulls enemies.

The Plasma Volt Discharge will allow you to pull multiple enemies in the vicinity.

Charge in the designated direction. If this move hits an enemy, unleash a combo attack that also deals a set amount of damage to itself. If the user hit an enemy with Volt Switch, Spark, or a boosted attack before using this move, the number of attacks in the combo is increased.

Also deals damage to nearby enemies when this hits. A great and quite unfair tactic you can use on Zeraora is to use Volt Switch then Wild Charge then teleport back by using Volt Switch again to safety. This tactic will allow you to damage your targets without any room for retaliation from your enemies.

Unleash a blast of lightning, dealing damage to enemies in the area of effect and throw them. This also creates a zone of plasma that increases the user’s basic attack range and damage dealt while inside this zone.

Plasma Gale is a sure hit Unite move that deals a ton of burst damage to the initial target and to those around them.

After hitting the target enemy, the enemy is thrown and a plasma field appears that buffs Zeraora’s basic attack, giving it bonus range and damage.

Everyone hit by Plasma Gale is paralyzed for a short time, allowing them to be pulled using Discharge.

Here are our Recommended builds on Zeraora

Volt Discharge is a high-level build that is great for setups, assassination, and team fights. Volt Switch and Discharge have a very interesting synergy as when they are combined, the pulling effect of Discharge can be used to pull paralyzed enemies to Zeraora’s original position after casting Volt Switch.

Muscle Band increases the user’s attack speed and makes their basic attack deal damage based on their target’s max HP. Zeraora has naturally high attack speed, making him a great user of this held item.

Energy Amplifier increases the rate you charge your Unite move. This makes Zeraora able to use his combos together with his Unite move as often as possible. Energy Amplifier also increases Zeraora’s damage output after using his Unite move, further amplifying the buffs he receives from Plasma Gale. Plus, Zeraora is a weak fighter when its moves are on cooldown so the cooldown reduction of this Held item is great for increasing the up time of Zeraora for fights.

Buddy Barrier grants a lot of HP that is a big deal for such a squishy speedster like Zeraora. The bonus shield when the user’s Unite move is activated is also a great help for Zeraora since when using this build, you are able to initiate fights.

X Attack will allow Zeraora to wreak havoc to all enemies in the area as its burst damage will be increased through this Battle Item, and the bonus damage will be two-fold with its Unite move is used.

Wild Spark is great for both 1v1s and for knocking out multiple low HP pokemon because Wild Charge offers little counterplay to enemies once it lands and Spark is an easy way to apply marks on enemies to boost the damage output of Wild Charge.

Razor Claw increases the basic attack damage after using a move. Since Spark is a dash then basic attack move, Razor Claw fits the playstyle perfectly.

Zeraora is a Middle laner. His goal in the early game is to level up quickly as possible then gank either the Bottom or Top lane to apply pressure on the enemy team.

At the start of the match, get Agility and quickly jump over the ledge to quickly reach the single Lillipup at the center of the edge of the middle part of the map. Killing this wild pokemon will allow you to reach level 2 and be near Ludicolo. Use the Slash move to cancel Ludicolo’s move then quickly go to Bouffalant to do the same.

Afterward, you can either kill both Corphish or kill one then quickly proceed to a lane to pressure and try to kill one of the enemy Pokemon.

Do not stay in a lane for too long as you’d want to take control of the middle part of the map so you can deny experience to the enemy middle laner.

At 8:50, Vespiquen and a swarm of Combees will spawn at the center of the Top and Bottom lane. These wild Pokemon are heavily contested so you should go to either one of the lanes to help them secure some big experience and points.

After that, you’d just have to repeat taking the buffs and ganking lanes, scoring and securing wild Pokemon and objectives.

What is the role of Zeraora when taking objectives?

Zeraora has a lot of mobility and tons of damage. these two key qualities of speedsters allow Zeraora to assassinate attackers easily when timed correctly.

Attackers are the ones who usually have strong damaging moves that are capable of securing or stealing the important objectives, Drednaw, Rotom, and Zapdos.

Zeraora can also initiate a fight when using the Volt Discharge build by using the Plasma Gale > Discharge > Volt Switch combo to burst down and pull multiple enemies.

The Volt Discharge build is the more versatile build. Its Volt Switch move allows Zeraora to quickly go in and go out if needed because its second cast teleports Zeraora to the marked position on its original cast. This allows Zeraora to do risky plays and kill enemies while walking away unscathed or even with just a sliver of health.

Discharge, on the other hand, deals a lot of burst damage to an area and it can even be to pull paralyzed enemies Zeraora’s original position using the second cast of Volt Switch.

The Plasma Volt Discharge will allow you to pull multiple enemies in the vicinity.

This build is best used when enemies have squishy backlines like Gardevoir or Cramorant that need to be killed if they have a strong team fighting front lines like Snorlax and Blastoise.

This build on the other hand is great if your team has the upper hand on team fights and just needs more AoE damage and finishing moves. Wild Charge deals a lot of damage in 1v1 and even on team fights and once it connects, it is impossible to stop and so Spark is paired with it so that Zeraora is able to zap into the enemy lines while increasing Wild Charge damage.

When is the best time to use the Plasma Gale Unite move?

Plasma Gale deals some serious burst damage to a small area near its initial target. It is best used to assassinate a target that is also a threat to Zeraora. Once the initial target is knocked out, Zeraora will be able to wreak total havoc with the bonus range and damage to its basic attacks.

Zeraora can generate and influence strong magnetic fields to levitate and move at high speeds. Zeraora is known to travel as fast as lightning.