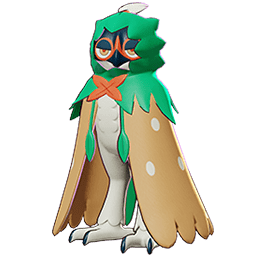 Best Decidueye build guide for Season 1 in Pokemon Unite. With our Decidueye guide, you will learn the best Held and Battle items to build, moveset, and how to use the moves of Decidueye properly. Learn tips and tricks on how to play Decidueye and counter your enemies.

Pelts leaves in the designated direction, dealing damage in a cone to enemies hit . For a short time after using this move, Decidueye’s Attack is increased by 10% and basic attack speed is increased by 25%. Leafage is an area damage move that also buffs the damage and attack speed of Decidueye.

Use it to secure wild mons and to harass opposing Pokemon.

Summons whirling razor leaves. While active, Decidueye’s basic attack is replaced by a new basic attack that targets all enemies in range, as well as increasing Attack by 10% and basic attack speed.

Increases basic attack damage by 2% of the enemies remaining HP. Razor Leaf is a buff that lets Decidueye attack all opposing and wild mons in its attack range. It also grants bonus damage and attack speed.

This move is devastating in team fights if Decidueye is allowed to freely attack multiple opposing Pokemon while this move is active.

Due to changing Decidueye’s attack to damage everyone in the area, muscle band becomes a more important resource for it. Plus, once upgraded, it deals even more damage based on the enemy’s current health.

Be sure to be in a comfortable spot near your defenders and supports before using this move.

Charges power before firing a large arrow in the designated direction. Damage dealt increases the longer power is charged, but movement speed is decreased by 25% while charging. If this move hits after power is charged to the maximum, it can stitch enemies to the ground. The affected enemy has their movement speed is decreased by 80% for a short time while in the area, and receives damage upon leaving the area.

Deals 15% increased damage to enemies with less than 50% remaining HP. Spirit Shackle is a ranged skill shot move that deals damage in a straight line. It is charged before releasing and its range and damage scales with its charge time.

When charged up to its threshold, it also shackles the wild opposing Pokemon hit, decreasing its movement speed and dealing additional damage if it walks a short distance away from where it was hit.

Once upgraded, it deals more damage to low HP mons.

Deals damage to enemies and decreases their movement speed by 80% for a short time. Astonish is a sure-hit move that deals damage and slows the target once it hits.

Astonish is great for securing wild Pokemon, for chasing opposing Pokemon and slowing down gankers who are attempting to jump on you.

Creates a tempest of sharp leaves, dealing damage to enemies it hits and decreases their movement speed by 30% for a short time. At point-blank range, it also shoves enemies hit.

Increases the length of time that the movement speed of enemies is decreased. Leaf Storm is a defensive move that shoves enemies that are too close, briefly stunning them afterward and slowing them.

If an opposing Pokemon is chasing you, wait for them to use their dash moves if they have any before using Leaf Storm because if you miss the shove, it gives the enemy a window to easily kill you.

Defense reduction of enemies is increased to 80%. Shadow Sneak is a sure-hit move that acts like a debuff to the targeted enemy. It deals damage, slows down the enemy, and decreases their defenses.

Before using your alternate move, use Shadow Sneak on your target first to deal the highest possible damage to them.

Fires quills in the designated direction, dealing damage to enemies but does not pierce through them. The move ends by unleashing a large quill that deals damage to all enemies it hits. While using this move, Decidueye becomes immune to hindrances but is unable to move.

Nock Nock is a long-range artillery Unite move. It deals continuos damage to the first enemy hit by it then before the move ends, Decidueye fires a large quill that deals damage to all enemies it passes through.

Be sure to position yourself behind defenders or supports and underneath grass before using Nock Nock to secure your position as Decidueye is unable to move during Nock Nock.

You may change the target direction using the left movement control but the bigger swing you make, the more it becomes harder to control.

You may cancel Nock Nock early but the large quill won’t fire if you do.

Here are our Recommended builds on Decidueye

The Razor Shadow build turns Decidueye into a DPS machine. Razor Leaf allows it to deal a lot of damage per second in an area and Shadow Sneak amplifies its damage to a single target.

Scope Lens increases critical-hit rate and critical-hit damage. Since, Decidueye is a high attack speed, basic attack based Pokemon, it will proc critical hits a lot of time.

Muscle Band adds damage to basic attacks based on the current health of its user’s targets. Thanks to Decidueye’s high attack speed and because of Razor Leaf’s area basic attack buff, this Held Item is a must for Decidueye.

Razor Claw adds more damage and critical-hit rate plus it gives passive bonus damage to its user’s next basic attack after using a move every two seconds.

X Speed allows Decidueye to maintain distance and maximize the bonus damage from Decidueye’s passive, Long Reach against its enemies with ease thanks to its bonus movement speed.

The Spirit Sneak build is a balance between DPS and burst damage. Thanks to Spirit Shackle, Decidueye is able to nuke down low HP opposing Pokemon with ease even from extremely long ranges.

Decidueye is a long-ranged attacker who is capable of dealing so much damage from a great distance.

Decidueye may be played in the top or bottom lane, even in the middle lane but because of its lack of mobility, it may suffer against speedsters especially in the early game.

Decidueye’s passive, Long Reach grants it bonus damage when dealing damage against enemies from a distance. This effect procs both on basic attacks and on moves so keep your distance against enemies to always to maximum damage.

Decidueye’s basic attack has a stacking attack speed bonus so if a fight is about to happen, attack nearby wild Pokemon to stack up on the passive bonus even before the fight starts.

What is the role of Decidueye when taking objectives?

Decidueye has a lot of damage per second. Because of this, it is capable of taking down Drednaw, Rotom, and Zapdos fast. But because of its fragile nature, Decidueye needs to have a defender or a support by its side while taking the objective.

If enemies try to contest the objective, activating Razor Leaf will allow Decidueye to attack both opposing Pokemon and the objective at the same time.

The Razor Shadow build allows Decidueye to deal large amounts of damage per second. It can be to all enemies in the area thanks to Razor Leaf and it can be to a single target thanks to Shadow Sneak.

On team fights, do not show yourself early in the fight because the enemy speedster will always be on the lookout for you. Stay close to your defenders and supports while trying to hit opposing Pokemon you can damage safely.

The Spirit Sneak build is almost the same as the Razor Shadow build but the main difference comes from losing the area damage in exchange for more burst damage thanks to the Spirit Shackle move. Use Spirit Shackle to slow down enemies who overextend and to kill fleeing low HP enemies.

When is the best time to use the Nock Nock Unite move?

Nock Nock is a long-ranged Unite move that deals large amounts of continuos damage and also some burst damage in the end.

It can be used to either damage enemies even before they reach the objective. When they become low enough before reaching the objective, they will think twice before contesting.

It can also be used to snipe down low HP enemies who are trying to flee. Do this only if you used the Razor Shadow build. Otherwise, use Spirit Shackle to snipe down enemies instead.

Nock Nock can also be used to try to steal objectives but because its initial projectile can be blocked and its last quill cannot be immediately activated, you have to use it at around 30-40% of the objective’s health so it can have a higher chance of stealing the objective with its large quill.

Decidueye may seem cool and collected but it can be easily startled. If it is surprised, it begins to panic. Decidueye only requires a tenth of a second to pluck, aim, and fire an arrow. Even with its speed, it is accurate to up to half a mile away.